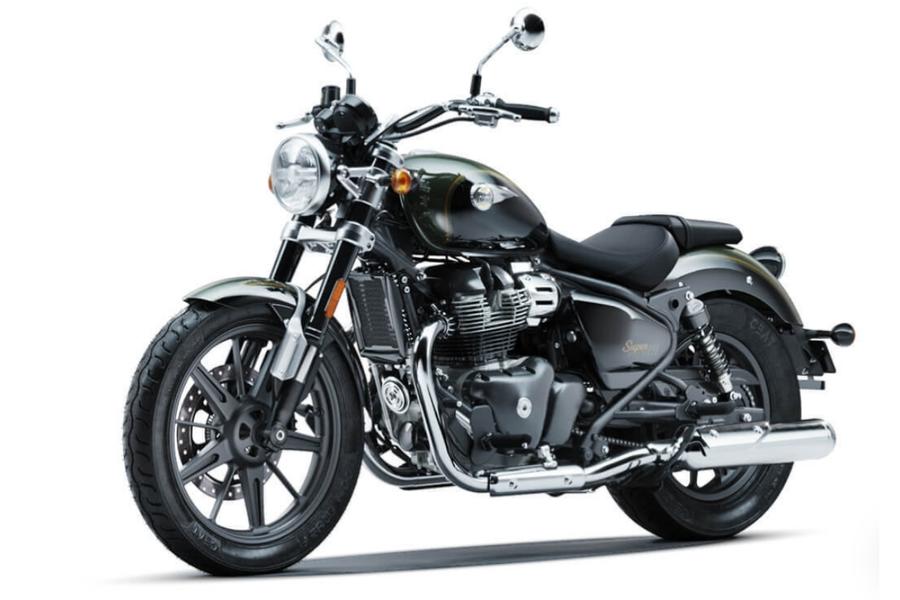 Following the global unveil at the EICMA 2022, the Royal Enfield Super Meteor 650 has now been showcased at the ongoing Rider Mania event in Goa. This is a cruising motorcycle that will go on sale in January 2023 in India. Its pre-launch bookings have also been started for attendees at Rider Mania.

The Super Meteor 650 is the brand’s first 650cc cruiser that is based on its tried-&-tested 650cc platform. However, it receives an all-new chassis and a number of firsts for the Royal Enfield such as a Showa USD fork and a full-LED headlight system. The cruiser also receives a tripper navigation system as standard fitment. The bike rides on 19-inch front and 16-inch rear alloys, fitted with tubeless CEAT Zoom Cruze tyres in 100- and 150-sections, respectively.

Compared to the Meteor 350, the upcoming Super Meteor 650 is 45mm wider and has a 100mm longer wheelbase. Tipping the scale at 241kg, it is about 50kg heavier than its younger sibling. In fact, it is the heftiest modern-day Royal Enfield bike. Also, at 135mm, it has a 35mm shorter ground clearance, which could cause trouble on broken/uneven pathways. On the contrary, it features a 25mm shorter seat height, resulting in better handling of the bike’s heft as well as wider accessibility to all types of riders.

Royal Enfield will offer the Super Meteor 650 in two variants: Standard and Tourer, and in three colour clusters: Astral, Interstellar and Celestial, with the last being dedicated only to the Tourer trim. The Standard variant comes with a sleek, stripped-down design and a tiny pillion seat, whereas the Tourer comes with a bigger windscreen, a larger pillion nest and a backrest.

The Super Meteor 650 will also be offered with a wide range of accessories, letting buyers personalise the bike as per their needs.

Powering the Royal Enfield Super Meteor 650 will be the 648cc, air-oil-cooled, parallel-twin engine (42PS/52Nm) as the Interceptor and Continental GT, albeit with bespoke mapping and gearing. For transmission duties, it gets a 6-speed gearbox along with a slip-assist clutch.

We expect Royal Enfield to price the Super Meteor 650 from around Rs 3.5 lakh (ex-showroom), pitting it as a more affordable alternative to the Kawasaki Vulcan S.