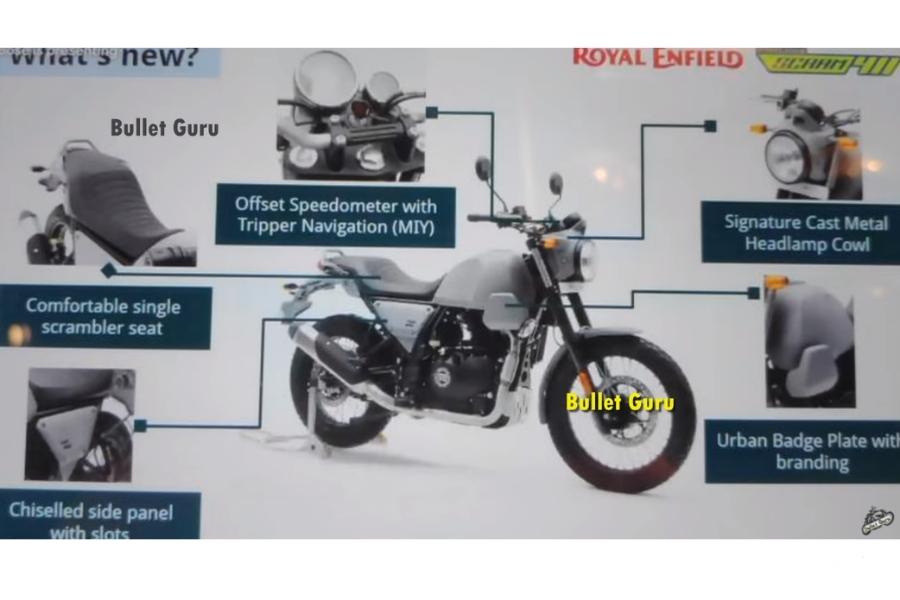 Brochure images of the Royal Enfield’s upcoming scrambler bike have been leaked on the webs, revealing that it will be called ‘Scram 411’. It will be based on the Himalayan and is likely to undercut the adventure motorcycle by a decent margin. For reference, the go-anywhere Royal Enfield Himalayan currently retails between Rs 2.14 – 2.22 lakh (ex-showroom Delhi). Once launched, it will go up against the newly launched Yezdi Scrambler (Rs 2.04 lakh) and Honda CB350RS (Rs 2.02 lakh).

Design-wise, the Scram 411 looks quite similar to the Himalayan, featuring a sculpted fuel tank but with smaller extensions, chiseled side panel, stepped seat, retro-styled round headlamp (sans the windshield), and an upswept exhaust. However, it gets the smaller front wheel (probably of 19″) with dual-purpose tires. As a result, the ground clearance has been reduced to 200mm (20mm lower than the Himalayan).

Besides, the bike also features a more conventional front mudguard, a differently-designed front disc rotor, and a semi-digital instrument cluster with tripper navigation (borrowed from the Meteor 350).

Royal Enfield will also offer a bunch of official accessories, apparel, and merchandise with the upcoming scrambler, including keychains and t-shirts.

The Scram 411 will be powered by the same 411cc single-cylinder counterbalanced air-&-oil-cooled engine as the Himalayan that belts out 24.3PS and 32Nm, paired to a 5-speed transmission.