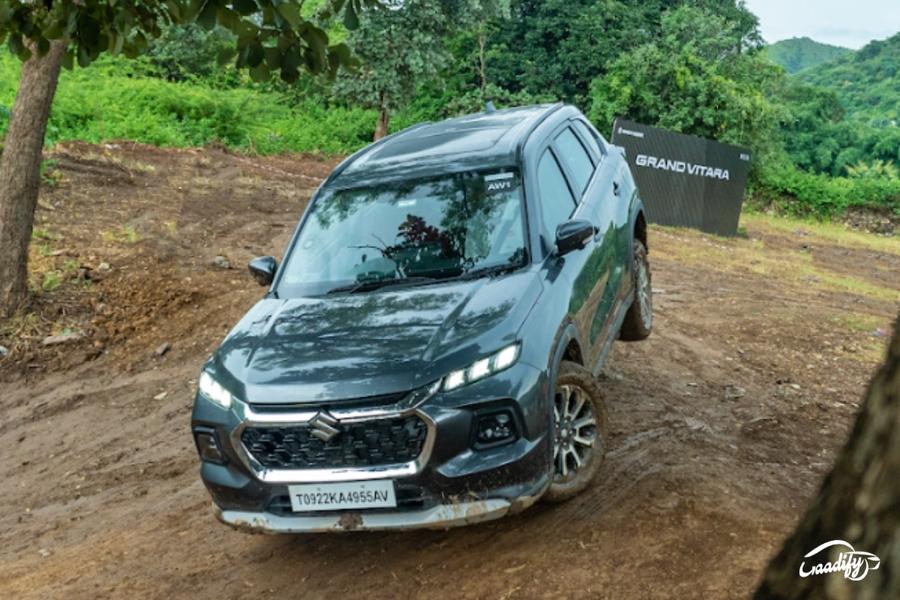 Maruti Suzuki Grand Vitara Review: Pros, Cons, and Should You Buy It?

The SUV segment once had a strong presence of diesel machines. But things are gradually changing due to stricter emission norms. Maruti Suzuki took this opportunity to enter the highly-contested mid-size SUV segment with the all-new Grand Vitara, offering it with a segment-exclusive petrol-AWD combination and a self-charging strong hybrid powertrain. But does it has what it takes to compete with established players like the Hyundai Creta and Kia Seltos? Let’s find out.

Co-developed with Toyota, the Maruti Suzuki Grand Vitara is based on the same Global C platform that also underpins the new-gen Brezza and S-Cross. Design-wise, the SUV looks quite upmarket. The carmaker has done enough changes to make it look different from its sibling rival, the Toyota Hyryder.

Following Nexa’s “Crafted Futurism’ design language, it sports a mesh-pattern grille up front, flanked by LED projector headlamps. There’s also a chrome strip connecting the 3-Point NEXTre’ LED DRLs that also work as turn indicators. The fog lamps are not present due to the placement of the main lights lower down on the bumper.

The silhouette of the car is largely similar to its Toyota counterpart, except for the differently designed 17-inch alloy wheels that are shod with 215/60-section tires. At the rear, its connected taillights have three-piece LED elements, mimicking the LED DRLs. Lower, in a separate vertical housing, are the reversing lamps and indicators. Adding to its overall charm is the ‘Grand Vitara’ moniker on the tailgate and the dark grey faux skid plate lower on the bumper, giving it a rugged appearance.

As for color options, the SUV is offered in six single-tone and three dual-tone paint schemes.

Overall, the Maruti Suzuki Grand Vitara looks stylish and elegant, something that you’ll adore even after 5 to 10 years. Now, here’s a look at its dimensions and how it fares against its rivals: –

Gauging 4,345mm in length, the Maruti Suzuki Grand Vitara is longer than its competitors. However, its wheelbase it shorter than its German and Korean opponents. It also has the smallest cargo space in its class. Nevertheless, its segment-leading 210mm ground clearance (unladen) gives it an edge over its rivals.

Inside, the new Grand Vitara’s cabin layout is nearly identical to the Toyota Hyryder’s, with leather inserts and silver/gold accents on the dash and door trims, giving it a premium look. Further, the superior interior quality and gigantic panoramic sunroof take it to another level. However, the fit & finish of the AC vents and the thin sunroof curtain may leave you a little disappointed. Also, it shares a lot of parts with the new generation Brezza, such as the floating infotainment system, three-spoke steering wheel, climate control panel, gear lever, switchgear, HUD, and much more, but that isn’t any bad thing.

Talking of the interior scheme, Maruti Suzuki has drapped its mild-hybrid variants in a dual-tone black & maroon cabin theme, while its strong-hybrid trims get a black hue with gold accents.

Seat cushioning is excellent in the Grand Vitara. They are supportive and comfy. Further, the manually adjustable driver’s seat and tilt & telescopic adjustment functionality for the steering wheel enable you to find a comfortable driving position. A small hitch in the co-driver’s seat is an element on the underside of the dashboard that is likely to graze against the occupant’s legs.

You get an ample amount of space in the back seat of the car. There’s an acceptable knee room and plenty of space under the front seat to tuck your feet. The backrest also reclines to make you more comfortable. However, the headroom might be a trouble for taller passengers. However, what’s impressive is that it gets adjustable neck restraints as well as three-point seatbelts for all three passengers. There are also dedicated rear AC vents, two USB ports (both type A and type C), a front seatback magazine holder, reading lamps, door bottle holders, and a rear center armrest for more added comfort & convenience.

What will probably disappoint you on the Grand Vitara is its boot space of 355 liters, which is further compromised in the stronger-hybrid variant due to the placement of the lithium-ion battery pack. However, the 60:40 split rear seats provide some convenience. It is also worth noting that the full-size spare wheel for the Grand Vitara Hybrid is placed on the underside, with a getaway from the boot.

Starting with the DualJet mill that also powers the Ertiga, XL6, and new Brezza. It makes 103PS of maximum power and 137Nm of peak torque. It can be had with either a 5-speed manual or a 6-speed torque converter automatic transmission. The initial response of the engine is satisfactory and it feels relaxed & silent at low speed, making it suitable for city driving conditions. Further, the sleek gear slotting and light clutch pedal work as icing on the cake. However, the highspeed overtakes will require some planning, especially in full-load conditions. That said, the power delivery is unbent and you’ll definitely miss that force in performance that you get from its rival’s turbo engines. However, what you’ll love is the fuel efficiency.

Maruti Suzuki has also offered its manual version with the segment’s first four-wheel-drivetrain called AllGrip Select. It features four driving modes: Auto, Snow, Sport, and Lock, which can be selected with the help of a simple push-and-turn dial located at the center console tunnel. Using a feedback control module, it predicts slippage based on the road surface, throttle opening position, steering angle, and other variables, and distributes torque to the wheels accordingly. We have tested it on a man-made off-road track and it performed effortlessly. All the modes do their duties well, but the lock mode will make you fall in love with it. We will talk about the working of the off-road modes in detail in our long-drive review in the future.

Now coming to the strong-hybrid powertrain, this is what we will urge you to buy if your budget allows. It gets an EV mode and it solely works when you pick the car from a standstill, so it remains completely silent. Be gentle on the throttle and you can accomplish your most of the city drive in electric mode. However, as soon as the battery starts running out of juice, the engine kicks in and you’ll know that it’s a 3-cylinder unit. It’s noisy and vibey as expected, but by no means invasive. As speed gains, the engine start propelling the wheels while transmitting some energy to the battery pack so that it can charge.

Apart from the EV, the Grand Vitara also gets three other driving modes: Eco, Normal, and Power. The difference in throttle repose is clearly evident in each mode, but not as significant for turning the SUV into a rocket, even in power mode.

The USP of this powertrain is its fuel efficiency. In our test ride of over 500 kilometers, we achieved an incredible fuel efficiency of over 25 kmpl. However, you can also easily achieve the official claimed figures of 27.97kmpl by being gentle on the throttle.

The Maruti Suzuki Grand Vitara remains steady and composed at all speeds. And since, its suspension is slightly on the stiffer side, the body roll is minimal. The steering has good amount of weight, assisting you to maneuver the car confidently even at highway speeds. However, you still can’t place it in a fun-to-drive category. Thanks to the all-four disc brakes, the anchoring power is strong. Driver visibility is also good, but the small rear windshield with open rear headrests will somewhat block your view.

Things could have been better (Cons): –

If you are looking for a comfortable, features-loaded SUV with superior fuel efficiency, then you should consider the Maruti Suzuki Grand Vitara, especially its hybrid variant. However, if you’re looking for some outright performance, this might not be a good option for you.