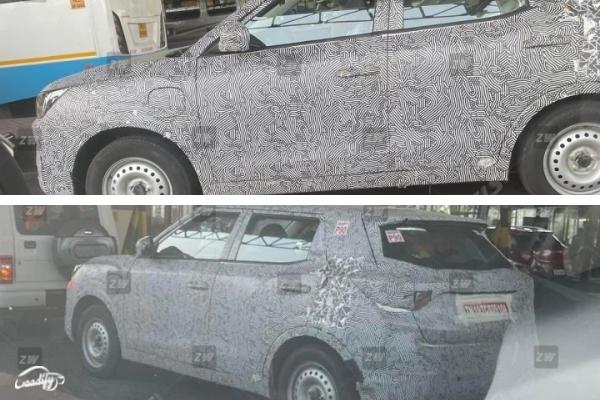 Mahindra is up and heading to get its XUV300 Electric on the track by the promised 2024 timeline. Recently, the electrified SUV has been caught in lenses for the first time since it was showcased at the 2020 Auto Expo. Its production-spec version could use the XUV400 moniker to give it a different identity.

Mahindra XUV300 Electric – What do the spy shots reveal?

Since the test mule was heavily camouflaged, it doesn’t reveal anything much except for the fact that its charging port lid will be mounted on the front fender (similar to the eKUV100). Furthermore, we can also notice that its silhouette looks largely similar to its ICE counterpart.

What else do we know so far?

The XUV300 electric is likely to be based on the Mahindra Electric Scalable and Modular Architecture (MESMA) platform. It will also get a few cosmetical differences from its ICE version, including a closed-off grille, restyled front & rear bumpers, and redesigned alloy wheels. Besides, there will be plenty of blue highlights inside and out.

While its battery specifications and drive range are yet to be revealed, it could come with two advanced lithium-ion battery packs (developed by LG Chem) to target different price brackets.

We expect Mahindra to price the XUV300 electric from around Rs 15 lakh, putting it against the largest selling EV of the country, the Tata Nexon EV.