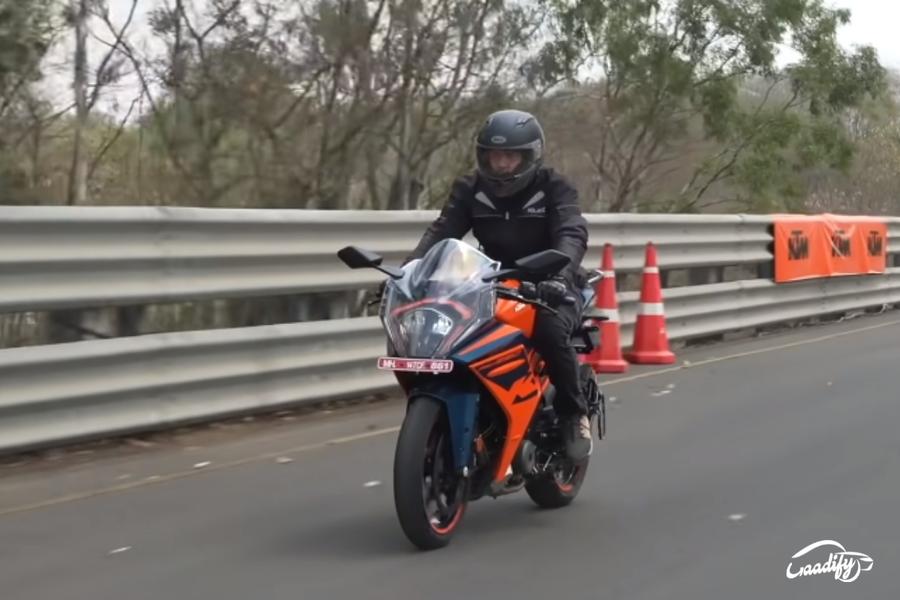 Austrian bike maker KTM has recently launched the all-new RC 390 in the Indian market, and a lot has changed in terms of technology and cosmetics. What all is different in the new KTM RC 390 from the outgoing model? Let’s find out!

The RC 390 does away with the chiseled looks of the outgoing model and now sports a more broad, grown, and menacing profile. It sports a new single-piece LED projector headlamp with boomerang-shaped DRLs-cum-indicators, a bigger windscreen, fairing-mounted rear-view mirrors, a revised bigger fuel tank design with increased capacity (+4.2-litres from the outgoing model’s 9.5 liters tank), and a new split seat setup with broader pillion support. Also, the fuel tank is now made out of metal instead of plastic.

KTM has managed to improve the handling of the bike by equipping it with a new 1.5kg ultra-light trellis frame with a bolt-on sub-frame combo (similar to the 390 Duke), 1.7kg lighter five-spoke bionic alloy wheels, lightweight foot pegs, and almost a kg lighter braking hardware. This, combined with the new two-step height-adjustable clip-on handlebar, makes for a lighter and more riding-focused ride.

KTM has also offered the upgraded track machine with a new preload and rebound adjustable split-piston WP APEX shock-absorber at the rear. However, unlike its European-spec version, Indian-spec RC 390 doesn’t feature an adjustable front fork.

The new RC 390 gets rid of the outdated LCD display for a much more modern TFT display with KTM My Ride compatibility. Unfortunately, it misses out on navigation. The bike also gets a new switch cube to control the various functions within the TFT display.

In the area of safety, the RC 390 now gets cornering traction control and cornering ABS with SUPERMOTO mode that permits you to switch off the rear ABS.

Also Read: Royal Enfield Meteor 350 To Get A New Variant

While the new KTM RC 390 remains mechanically unchanged, it gets a 40 percent bigger airbox that increases its torque output by 1Nm (now stands at 37Nm) and sweetens torque delivery & throttle response.