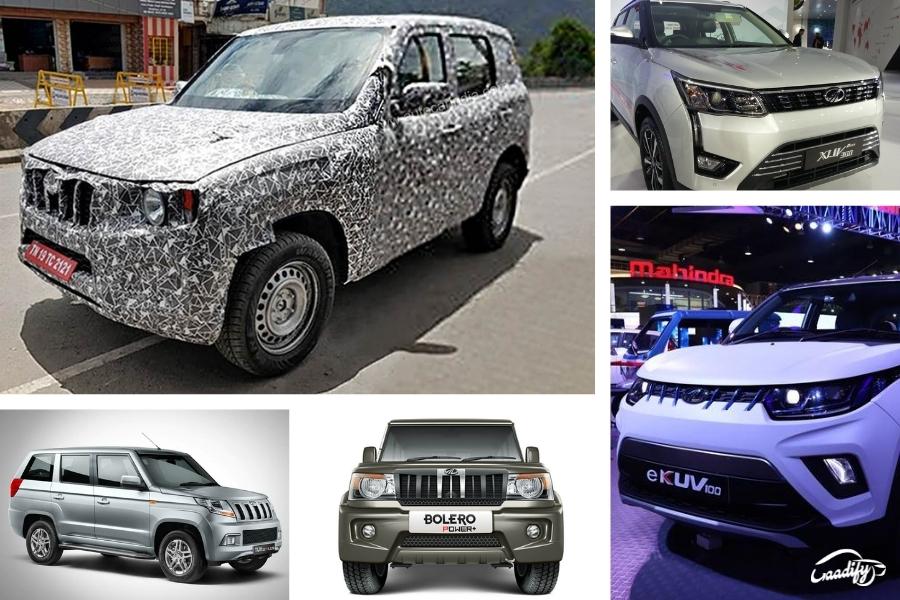 Mahindra, the SUV maker, is planning to launch a slew of new products in India this year, including the highly awaited next-generation Scorpio SUV. Here are the top 5 upcoming Mahindra cars and SUVs to watch out for in 2022:

The new-gen Mahindra Scorpio is one of the most anticipated launches of 2022. It has been spied testing infinite times, exposing its design and features details. It will be larger and more premium than its existing model. It will get completely new styling with a host of premium features such as an electric sunroof, a larger touchscreen display with wireless Apple Carplay and Android Auto, connected car tech, multiple drive modes, dual-zone AC, roof-mounted speakers, 360-degree camera, multiple airbags, all-wheel disc brakes, and much more.

With XUV700’s 2.0-litre mStallion turbo-petrol and 2.2-litre turbo-diesel engines, the body-on-frame SUV will be more powerful than its ongoing version. An all-wheel-drivetrain (AWD) could also be reintroduced.

Also Read: Current-Gen Mahindra Scorpio Likely To Be Sold Alongside The New Model; Here’s Why

Mahindra will launch its first mass-market EV this year in the form of eKUV100. Debuted in a production-ready avatar at the 2020 Auto Expo, it is likely to be powered by a 40kW electric motor. However, unlike its earlier showcased model which had a 15.9kWh battery pack, its production-spec version is likely to come with a larger battery pack for a claimed range of over 200 kilometers.

Going by the previous claims of Pawan Goenka, former Managing Director of Mahindra Group, the e-KUV100 will be the most affordable EV in the country.

Mahindra Bolero is set to receive some minor cosmetical changes, along with a dual-paint scheme. Currently, the Bolero comes in three monotone colors: Mist Silver, Lakeside Brown, and Diamond White paint. No mechanical changes are expected. The rugged SUV will continue with the same 1.5-litre diesel engine  (75PS/210Nm) as the current model, paired with a 5-speed manual transmission.

Showcased at the 2020 Auto Expo, Mahindra will soon launch the XUV300 with a more powerful 1.2-litre direct-injection (DI) turbocharged petrol engine that is proficient in developing 130PS of maximum power and 230Nm of peak torque, making it the most powerful car in its category. This new engine will be offered with its existing 110PS/200Nm 1.2-litre turbo-petrol and 117PS/300Nm 1.5-litre diesel engines. Besides, the sub-4-meter SUV could also witness some significant visual changes inside and out.

Mahindra introduced the facelifted TUV300 last year with ‘Bolero Neo‘ badging. And now, the brand is gearing up to introduce its extended wheelbase version that will be known as ‘Bolero Neo Plus‘. Similar to the now-discontinued TUV300 Plus, the LWB version of the Bolero Neo will be around 400 to 410mm longer than the standard model. It will come in a 9-seating configuration, featuring two side-facing bench-type seats in the third row.