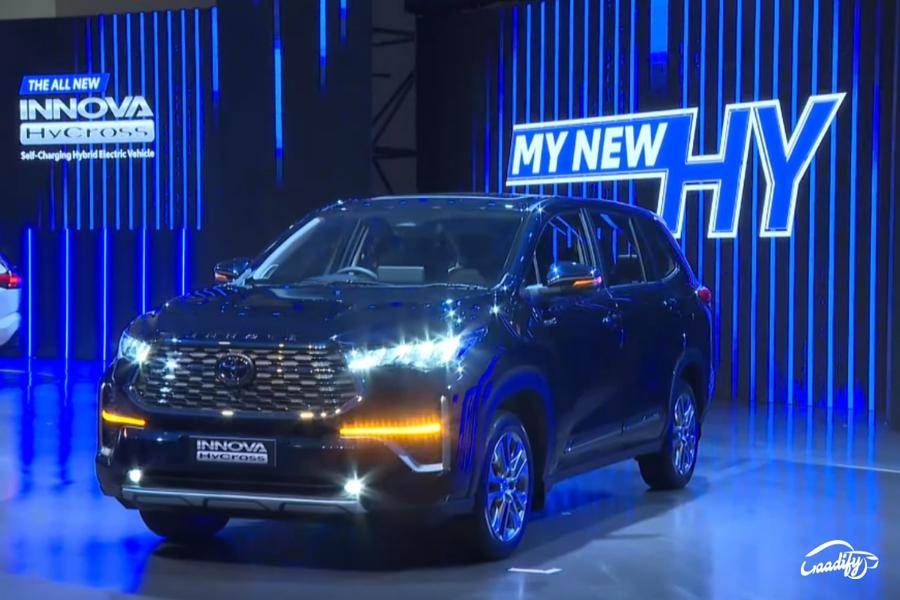 It’s finally here! Toyota has unveiled the new-generation Innova Hycross in India. It is likely to be sold alongside the ongoing Innova Crysta.

Aesthetically, the new Toyota Innova Hycross is unmistakably an MPV, albeit with a slight touch of SUVish elements like broad wheel arches, body cladding, and an upright stance, as well as sharp creases on its side profile.

As opposed to the previous-generation Innova’s body-on-frame chassis, the new-gen model is based on Toyota’s TNGA-C monocoque platform, which should improve the stability and driveability of the new MPV. Additionally, it has resulted in a weight loss of 200 kg. Moreover, its wheelbase has grown by 100mm, which will add to its cabin space.

A substantial amount of work has been done inside the cabin. With a much more coherent dashboard design, it now looks more upmarket and well-built. It will be offered in two seating configurations: seven, and eight-seater, with the former getting electrically adjustable middle-row captain seats with a leg rest for added convenience.

The biggest highlight of the new Innova Hycross lies underneath the bonnet. The new-gen MPV gets a 2.0-litre petrol engine with a self-charging strong-hybrid system which delivers a combined power output of 186PS. Paired with a single-speed e-CVT automatic transmission, it is claimed to return an impressive fuel efficiency of 21.1 kmpl. The same engine will also be available in a non-hybrid configuration, with a peak putout of 174PS and 205Nm.

There’s no diesel engine on offer.

While the Toyota Innova Hycross doesn’t have any direct rivals, it can be seen as a premium alternative to Kia Carens and Mahindra Marazzo. However, it will soon face competition from its Maruti Suzuki equivalent which is also expected to be launched soon.