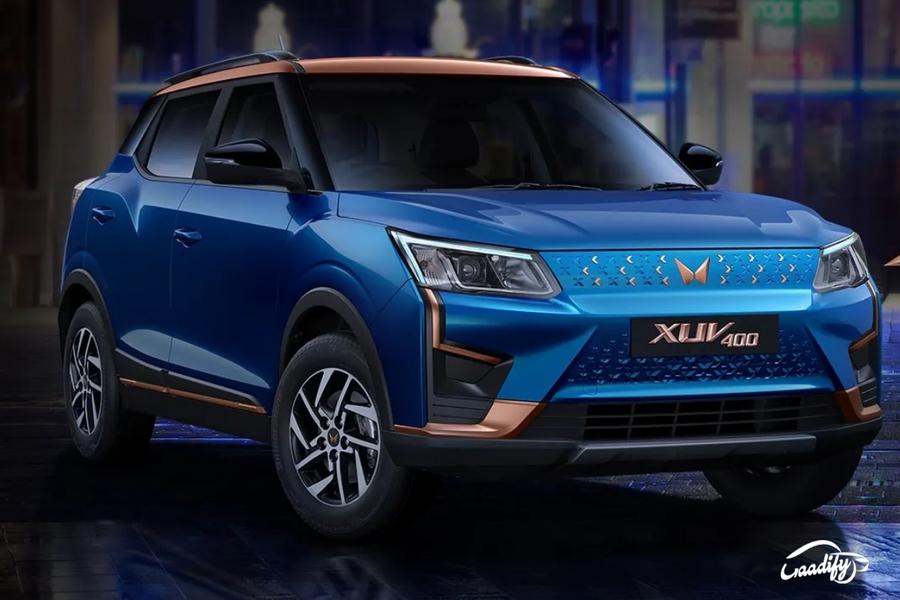 After multiple teasers and spy shots, the Mahindra XUV400 has finally made its global debut just a day before the World EV Day. It is essentially an all-electric version of the XUV300 that will be launched in January 2023. However, its test drives will commence from December 2022 across 16 metropolitan cities.

The Mahindra XUV400 gets an IP-67 rated 39.5kWh battery pack that claims an ARAI-tested range of 456km on a single charge. It powers a Permanent Magnet Synchronous (PMS) Motors generating maximum power of 149PS, along with a best-in-class peak torque of 310Nm. The drive is sent to the front wheels. Sweetening the driving dynamics are three available driving modes: FUN, FAST and FEARLESS. Mahindra claims the XUV400 can reach 0-100kmph mark in 8.3 seconds before attaining a top speed of 160 kmph.

It can be charged to the 80% mark through a 50kW DC fast charger in just 50 minutes. A 7.2kW charger, on the other hand, can juice it up to 100 percent in 6 hours 30 minutes. One can even charge it through a regular 16A socket that will take around 13 hours to fully energise the battery pack.

Speaking of the design, the Mahindra XUV400 looks largely similar to its ICE counterpart, except for some EV-specific changes, such as a clossed-off front grille with dual-tone black & copper elements and tweaked bumpers at both ends. It also receives new alloy wheels and a redesigned tail lamp, making the SUV look smart and trendy.

Dimensionally, the SUV measures 4.2m in length, making it 205mm longer than the XUV300. However, the width and wheelbase of the car remains the same. It is also bigger than India’s best-selling electric car, the Tata Nexon EV.

Inside, the XUV400 features the same dashboard layout as the XUV300, albeit in an all-black avatar with copper accent here & there. Part of the features list include a 7-inch BlueSense touchscreen infotainment with Apple Carplay and Android Auto, 60+ connected car tech with remote control functionality, OTA updates support, auto AC, electric sunroof, and a height-adjustable driver’s seat. The SUV also comes with first-in-segment frequency dependent dampers and MTV-CL (multi-tunable valve with concentric land) technolgy for optimum comfort.

Safety equipment on board includes six airbags, all four disc brakes, ABS with EBD, and a rear parking camera with sensors.

The Mahindra XUv400 will go up against the Tata Nexon EV MAX, MG ZS EV, and Hyundai Kona Electric in the Indian market.