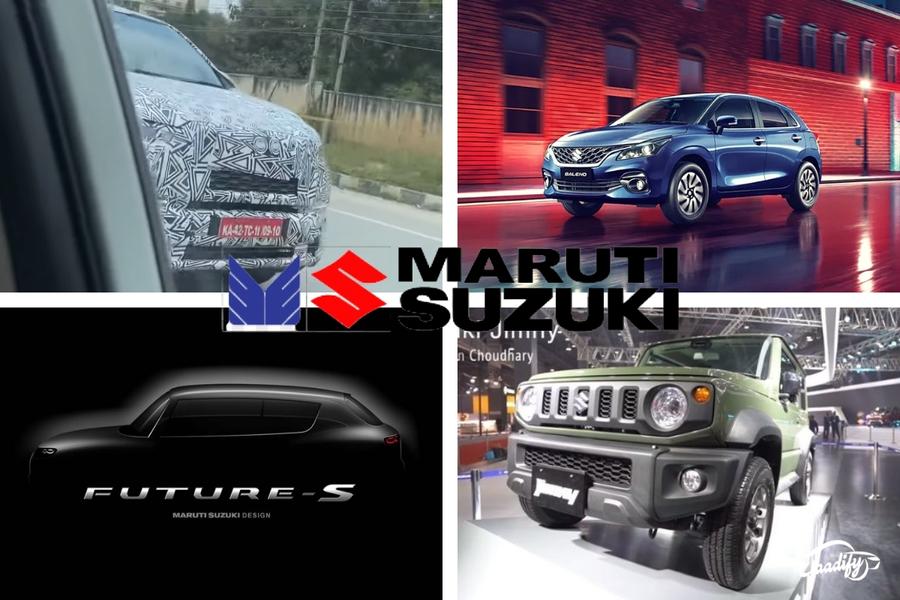 The year 2022 was full of actions for Maruti Suzuki. The company launched a number of new products and updated some of its existing models. And now, the company is reportedly working on five new products that will soon rock the Indian market. So without further ado, here’s the scoop on the upcoming Maruti Suzuki cars heading in the coming months.

The highly-anticipated 5-door Maruti Suzuki Jimny off-roader is in development for the Indian market and is likely to hit our shores in early 2023. The brand is expected to unveil the SUV at the 2023 Auto Expo. As revealed by a leaked document, the long-wheelbase iteration of the Jimny will sit under 4 meters, with the wheelbase measuring around 2,550mm. While its technical specifications are yet to be revealed, reports suggest that it will be powered by a 1.5-litre petrol engine fitted with the brand’s AllGrip Pro AWD system. A Boosterjet turbo-petrol could also be on the cards.

Once launched, it will rival the likes of Mahindra Thar and Force Gurkha.

Maruti Suzuki is working on a Baleno-based new compact crossover (codenamed YTB) that’ll be positioned above the premium hatchback in the carmaker’s Nexa lineup. Revealed by tons of spy shots, it will boast a coupe-like silhouette with an aggressively sloped roofline. However, its front design will be largely inspired by the newly launched Grand Vitara. The homegrown carmaker is likely to offer it with Baleno’s 86PS 1.2-litre DualJet petrol and a 1.0-litre Boosterjet turbo petrol engine options. Click here for more details.

Toyota’s upcoming Innova Hycross will also be shared with its alliance partner Maruti Suzuki. Underpinned on the Toyota’s TNGA-C architecture, it is expected to be powered by a 2.0-litre petrol engine with a self-charging strong-hybrid system. It could also receive a naturally aspirated petrol engine with a mild-hybrid system. Styling-wise, it will feature some distinct exterior elements to give it a different appeal. Expect it to go on sale in the first half of 2023.

Revealed by a leaked type approval document, Toyota is working on a CNG iteration of the Glanza hatchback. So we expect the Baleno will also receive the same powertrain option in the near future. It will be powered by the same 1.2-litre DualJet petrol engine that will make 77PS and 98.5Nm in CNG mode, a drop of 13PS/14.5Nm from the petrol-only model.

Maruti Suzuki has confirmed that the Alto K10 will soon receive the CNG powertrain option. It is likely to utilise the Celerio’s 56.7PS/82Nm 1.0-litre petrol-CNG engine with a 5-speed manual gearbox. Expect it to offer a fuel economy of over 35km/kg.