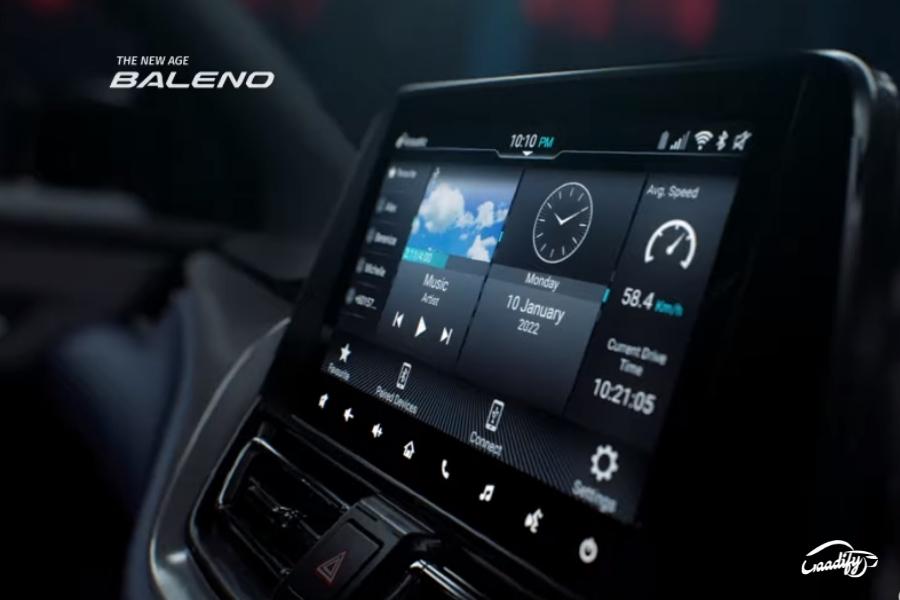 Maruti Suzuki has once again teased the 2022 Baleno facelift, this time revealing its floating infotainment system which looks quite bigger than the ongoing dashboard integrated 7-inch unit. The brand has named it SmartPlay Pro+ infotainment.

It’s new user interface looks quite premium & sophisticated and boats new information like average vehicle speed, driving time, etc. There’s also the touch-based control panel at bottom of the screen. Keen eyes could also notice ‘Acoustic’ written on the top-left corner, suggesting that there will be specialized sound modes. If reports are to be believed, it will get an Arkamys-tuned sound system.

Though the official details are yet to be revealed, it is likely to get connected car technology with greater features than the ongoing Suzuki Connect tech.

Besides, Maruti Suzuki has already confirmed that the new Baleno will get a segment’s first customizable heads-up display (HUD). Besides, it could also get the 360-degree camera (another segment’s first feature), wireless charging, slightly updated colored MID, new flat-bottom steering from the Swift, up to six airbags, and Electronic Stability Control (ESC).

Under the hood, the facelifted Maruti Suzuki Baleno is likely to get the same 1.2-litre VVT naturally-aspirated and 1.2-liter Dualjet petrol engines as the ongoing model. While the former is good for 83PS/113Nm, the Dualjet engine makes out 90PS/113Nm of torque. The dualjet unit also features a 12-volt mild-hybrid system for optimum fuel efficiency. Transmission duties on the new Baleno are likely to be performed by a 5-speed manual gearbox and an optional AMT instead of the existing CVT unit.

Bookings for the 2022 Baleno facelift are already underway ahead of its launch by February end. As for pricing, there’s no doubt that the 2022 Baleno facelift will command a significant premium over its current model, which ranges between Rs 6.14 lakh to Rs 9.66 lakh (ex-showroom Delhi). When launched, it will emerge as a more prominent contender against the Hyundai i20, Tata Altroz, Toyota Glanza, Honda Jazz, and Volkswagen Polo.