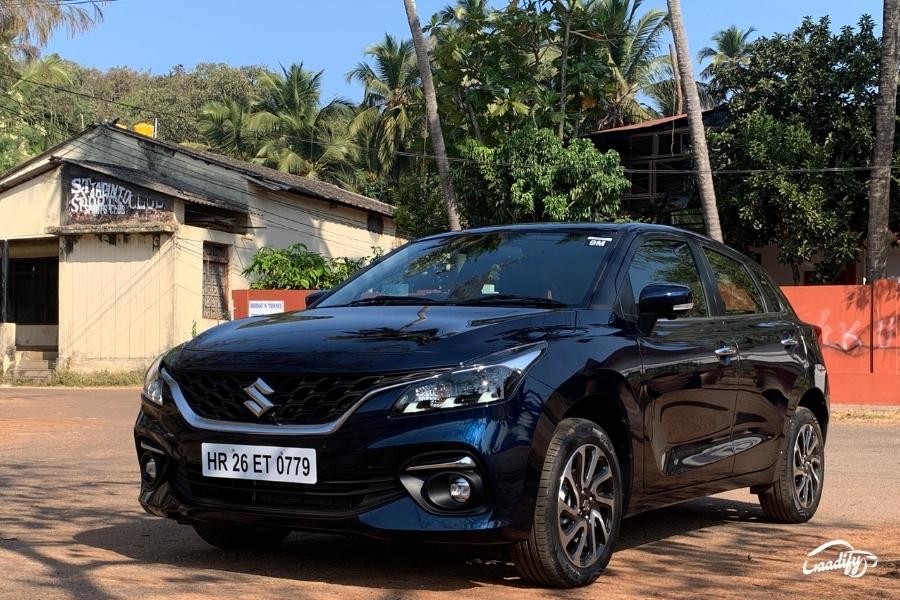 2022 Maruti Baleno Review: Pros, Cons, and Should You Buy It?

The Maruti Suzuki Baleno, which sells one unit every three minutes, has created a lot of buzz with its facelift update. With better looks, modern features, and improved mileage, the 2022 Baleno has indeed become a more mature product. But are these updates big enough to give it an edge over its rivals, especially the feature-rich Hyundai i20 and Tata Altroz? Let’s find out the answers in a unique pros and cons way: –

Being a facelifted iteration, the design updates are big enough to give it a fresh appeal, especially inside the cabin. The redesigned layered dashboard with a new floating infotainment system has a lot of pizzazz. Not only its style but the build & fitment quality have also been enhanced. The plastic trims have a smoother finish and look more premium than the pre-facelift version. Though there’s no soft-touch material finish on the dash, the centre and door armrests are sheathed in soft textile. The new leather-wrapped flat-bottom steering wheel too feels top-notch.

While the overall silhouette of the car remains unchanged, the car is 5mm shorter (at 3990mm) and 10mm lower (at 1500mm) than before. The automaker has also updated every panel on the new Baleno, making it about 50 heavier. There’s also a new set of dual-tone, machine-cut 16-inch alloy wheels and a more noticeable shoulder line.

The 2022 Baleno has gained lots of new features, which are truly boosting its premium quotient. The biggest highlight is here the new free-standing 9-inch HD touchscreen Smartplay Pro+ touchscreen information display, which gets Arkamys sound tuning for its 6-speaker sound system. Its snappy touch response, easy-to-use interface, and smartphone integration aid via Apple Carplay and Android Auto (wired for now) make it a wonderful addition to the car.

There are two other segments’ first additions in the form of a heads-up display (HUD) and a 360-degree surround view system, which are honestly quite convenient. While the surrounding view isn’t the sharpest, it accomplishes its task well. Interestingly, it also alerts of the rear-cross traffic.

Speaking of the heads-up display, it allows you to have majorly all the required driving-related without taking your eyes off the road. It illustrates the car’s speed, rpm range, instant fuel economy, cruise control indicator, door ajar warning, AC displays, and even gear indicator for the AMT variant. However, the disappointment comes when you know that it doesn’t show the turn-by-turn navigation feeds.

Yes, Maruti has also sweetened the safety quotient by offering up to six airbags, hill-hold assist, and an electronic stability program in the top-spec variants of the Baleno. Besides, features like dual airbags, ABS with EBD, rear parking sensors, brake assist, and ISOFIX child seat anchors will be standard across the lineup. The brand has also used a greater percentage of high-strength and ultra-high-strength steel in its structure.

While its crash test is yet to be done, Maruti Suzuki claims that it meets all current crash test norms.

Another department of the new Baleno that has seen a prominent update is the 1.2-liter K12N petrol engine. While its 83PS K12B version has been dumped, the 90PS/113Nm Dualjet DualVVT iteration with idle engine stop-start system is the only power mill on offer now. Sadly, it ditches the mild-hybrid system and so the CVT automatic transmission option for a cost-efficient 5-speed AMT, which now offers 15 percent more mileage than the older automatic unit. The same powertrain also powers the facelifted Swift and Dzire.

Talking about the performance, this new 1.2-liter K12N petrol engine delivers the best of a low-displacement naturally aspirated engine, offering a great combination of both usability and driving satisfaction. It is smooth, very refined, and lively enough to make overtakes effortless. Its revv friendly soul, relish reaching to the limit and keeping there. Also, it lets you move at low speeds in even high gears, making it ideal for city driving conditions. Further, the light clutch action and the slicker gearbox are the icings on the cakes.

Talking of the AMT, Maruti has again done a great job with the Automatic Manual Transmission. While it isn’t as smooth as CVT, you won’t notice the gearshifts much until you are hard on the acceleration pedal. However, the edge here is the fuel economy. In our mileage test, it delivered us around 17kmpl in city driving conditions.

The suspensions of the new Baleno are now more sophisticated than before, thanks to the recalibrated damping and other improved components. With this, the high-speed stability has also been improved as compared to the old model. With the larger disc brakes, the braking has also been enhanced. However, it would have been better if the steering feedback was further improved.

2022 Maruti Suzuki Baleno – Things Should Have Been Better (Cons)

1. Lack of a diesel engine and sophosticated automatic transmission

Compared to its key rivals like the Hyundai i20 and Tata Altroz, the Baleno lacks a diesel engine, which will be a big disappointment for a certain set of buyers. Also, all other cars in its category come with a proper automatic transmission (Altroz to get DCT in coming days), which Maruti has now dropped due to low demand.

2. Lack of some useful and gimmick features

Though the new Baleno is quite well-loaded, it lacks some premium features like a rear center armrest, middle seat headrest, sunroof, wireless function for Apple CarPlay and Android Auto, wireless smartphone charger, etc.

Similar to the previous model, the seat cushioning of the new Baleno feels too soft, which might result in a bit of discomfort over long journeys. However, there is enough knee room and headroom even for taller passengers.

Another disappointment is that the boot area has gone down by 21 liters when compared to the previous model. Also, the boot lip is very high, which causes loading and unloading heavy backpacks a task.