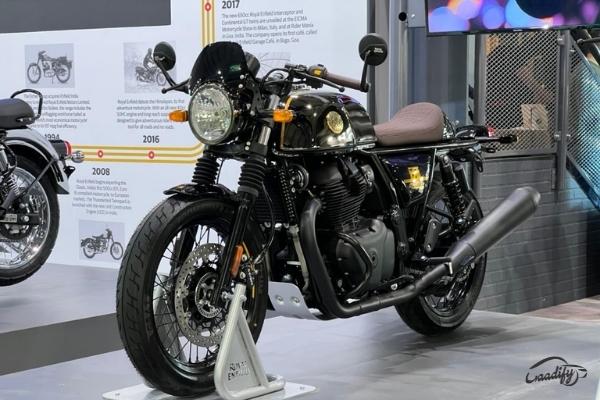 Royal Enfield has commenced deliveries of the 120th Year Anniversary Limited Editions of 650 twins, i.e., Interceptor 650 and Continental GT 650 across the nation. They were unveiled at the 2021 EICMA (Milan Motorcycle Show) ahead of their launch in December.

For those who aren’t aware, Royal Enfield has produced only 480 units of these special edition 650 twins and distributed as 120 units each for India, Europe, America, and South-East Asia, comprising 60 units of each model for each region. And interestingly, all the 120 units assigned to India flew off the shelves in just two minutes of opening the sale window. The Rear-Admiral of the Indian Navy Philipose G Pynumootil, Olympic medallist & shooter Gagan Narang, and actor & director Dhyan Sreenivasan were also among the first few owners of these limited-edition models.

Talking about the Royal Enfield Interceptor 650 and Continental GT 650 120th year limited editions, both the models come wrapped in a special black-chrome color paint scheme with hand-painted gold pinstripes and handcrafted die-cast brass badges on either side of the fuel tank, and 120 years emblem with a unique serial number of each motorcycle. They also get matt black finishing on the engine, silencer, and other elements of the motorcycles. The brand has also offered a host of genuine accessories with these bikes worth up to Rs 19,500, along with 3+2 years warranty package worth Rs 4,700.

Currently, the Royal Enfield is working on quite a few thrilling projects, including the new Bullet 350 and Super Meteor 650. The bikemaker has also recently launched the Himalayan-based scrambler motorcycle called ‘Scram 411’ that comes with lots of design changes when compared to its ADV sibling. Click here for more details.