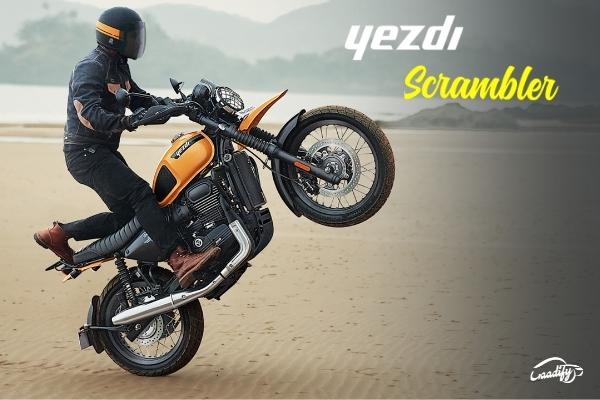 Classic Legend has finally revived the legendary Yezdi brand in India with the launch of three new motorcycles, namely the Roadster, Scrambler, and Adventure. Their bookings and test rides are now underway through Jawa’s dealership network across the country. Now, let’s have a look at their color options and complete price list:-

The Yezdi Roadster is the most affordable of the trio, whereas the Adventure is the costliest of the lot. While the roadster will compete with the Royal Enfield Meteor 350 and Honda H’Ness CB350, the Adventure will go up against the Royal Enfield Himalayan and KTM 250 ADV. On the other hand, the Yezdi Scrambler will face competition with the Honda CB350RS, Husqvarna Svartpilen 250, and the upcoming Royal Enfield Scram.

All three Yezdi models are powered by the same 334cc, single-cylinder, DOHC, liquid-cooled engine, mated to a 6-speed transmission. The same mill also powers the Jawa Perak. However, the bikemaker has tuned the engine differently for each model to suit their personality.

Yezdi has also claimed that they have used a different piston than the Jawa.

Similar to the engine tuning, each Yezdi bike also uses a distinct chassis, suspension setup, and wheels, among others. Starting with the Yezdi Roadster, it underpins a double-cradle frame poised onto a telescopic fork and twin shocks (travel: 135mm front and 100mm rear) and rolls on 18/17-inch alloy wheels with road-biased tires. It will be easily accessible to short-height riders thanks to its low saddle height of 790mm, with a curb weight of 184kg. It has a decent ground clearance of 175mm.

Riding on 19/17-inch spoke wheels wrapped in block pattern tires, the Scrambler also uses the same chassis and suspension setup as the Roadster. However, it has more suspension travel (150mm front and 130mm rear), a high ground clearance (200mm), and a slightly taller seat height (800mm). Interestingly, it is 2kg lighter than the Yezdi Roadster.

The fuel tank capacity of both the Roadster and Scrambler is 12.5-litre.

Speaking about the Yezdi Adventure, it gets long-travel suspension with 200mm of travel at the front and 180mm of travel from the preload-adjustable monoshock. Similar to the RE Himalayan, it also rolls on a 21-inch/17-inch wire-spoke wheel set-up and has a stealthy 220mm of ground clearance. Tipping the scales at 188kg, the ADV is the heaviest of the lot. It also holds the largest fuel tank (15.5-litre) and the tallest saddle height (815mm) among all.

Braking duties for all three bikes are handled by 320mm front and 240mm rear discs with dual-channel ABS assisted by three modes: Road, Off-road, and Rain.

All three models come with an LED headlight and taillamp, whereas Scrambler and Adventure also get LED indicators and a handlebar-mounted USB charger as standard. The trio features an LCD instrument cluster; however, the Adventure also gets Bluetooth connectivity and turn-by-turn navigation support. Its bigger display can also be adjusted for better visibility.

Besides, Yezdi is also offering a wide range of accessories for each bike, including knuckle guards, headlight guards, fly screen, bar-end mirrors, and in the case of the Adventure, panniers, auxiliary lights, top box, jerry cans, and hard luggage, etc are also on the list.