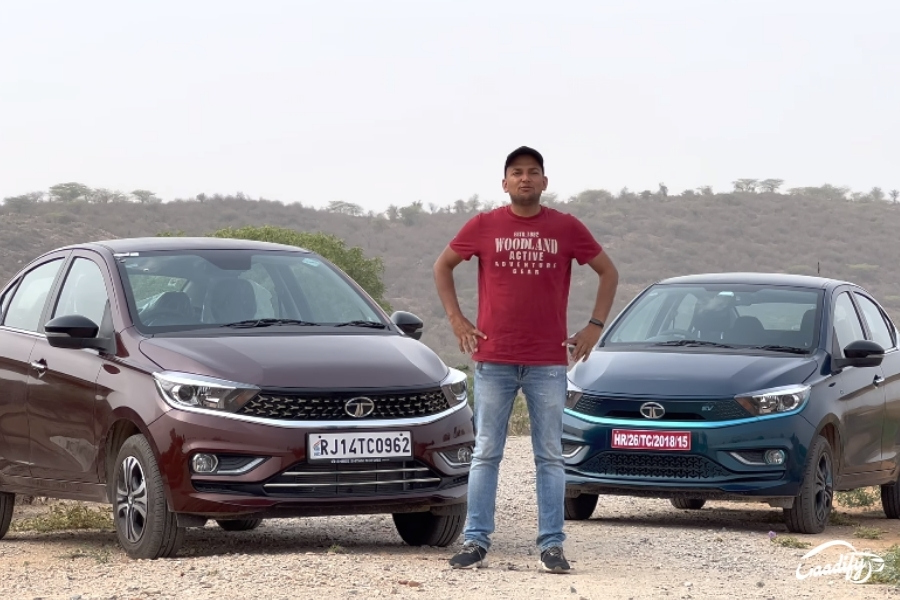 Tata Tigor EV Vs CNG: Which Car You Should Buy?

With the rising price of petrol and diesel, many people are switching to cheaper and alternative fuels, the two most popular of those being CNG of Electric.

For our comparison, we have two cars of the exact same model made by the same manufacturer, the Tata Tigor, which is offered in both CNG and electric avatar. While both the models are the exact same, their differences are much more extensive than it seem. So, let’s see which alternative is the more apt choice for you!

Both the Tata Tigor EV and Tigor CNG sport the same design, with subtle differentiating cues unique to their engine options. Where the EV sports the blueish tri-arrow theme, closed front grille, and EV badging to signify its electric nature, the CNG model gets design cues similar to the petrol version but gets an iCNG badging to represent itself apart.

Powertrain: Electric’s furious but the CNG is equally tame

This is where it may break the bank for you. The iCNG is based on the 1.2L petrol engine but gets significantly reduced power figures due to the CNG kit, with 12PS & 23Nm reduction in power and torque in comparison to the regular Tigor Petrol, the difference is clearly visible in driving the vehicle, with much slower overtakes and slower power delivery upon pressing the accelerator.

The EV, on the other hand, is a total polar opposite, with its 170Nm of instantaneous torque there is never a dull moment while driving and the car doesn’t seem to struggle whatsoever.

Both the Tata Tigor CNG and EV are equally well equipped in terms of tech. The only difference lies in the center console, where the Tigor CNG gets a whole center console to accommodate the 5-speed manual gear shift. The EV, on the other hand, is much more minimalistic, featuring a sleek round dial to switch between different drive modes (P,R,N,D), and the overall design cues wherein the EV the tri-arrow theme still follows with blue inserts.

Apart from this, the story is the same with the digital instrument cluster, 7-inch Harmon infotainment system, and auto climate control to name a few.

Safety is at the forefront of Tata, so rest assured both the models are built on the exact same platform and sport the exact same stellar 4-star GNCAP safety rating.

Tata Tigor EV vs CNG: Price and Cost of Ownership

Similar to how the driving performance was a deal-breaker for some, the price is very much likely to be the same case. Even with the subsidies on offer, the added batteries and electric motor in the EV boast a significantly higher premium (upwards of Rs 4 lakh) in comparison to the CNG, making it tough for certain buyers to commit to such an increment.

Through the table, it’s clearly visible that if your running per year is towards the higher end, the initial incremental cost of EVs is worth it, considering your cost down the line would be much lower. But with lower running, the ownership cost between the two cars would not be large enough to cover the initial cost.

Extremely similar yet vividly unique in their own virtues, the Tigor CNG and Tigor EV both are a great alternative to the regular petrol offering.

If you care about the environment and also want to enjoy a great performance from your vehicle, the Tigor EV is an absolute no-brainer for you, but if finances are in shambles and you’re on a strict budget then your eyes should stick to the iCNG.