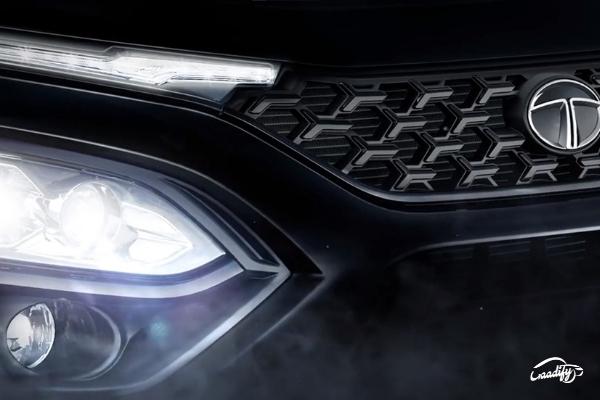 Tata Motors has teased the Safari Dark Edition on its social media, revealing that it will arrive on January 17, 2022. Its unofficial bookings have also begun at select dealerships across the country. After Harrier, Altroz, Nexon, and Nexon EV, it will be the fifth Tata model to get the darker treatment.

Also Read: Grab Benefits Of Up To Rs 60,000 On Tata Cars This January

Similar to the Harrier, Safari’s Dark Edition will wear a stealthier glossy-black paint, along with blacked-out treatment on the tri-arrow grille, fog lamp housing, lower bumpers, ‘SAFARI’ badging, and ORVMs. It will also get a dark chrome strip around the grille, dark grey alloys, and a ‘Dark’ inscription on the fenders, finishing its all-dark appearance.

Inside the cabin, it will boast a Gunmetal theme with gloss black applique and leatherette upholstery. As for features, the special edition variants will carry forward all the equipment of their corresponding regular trims. However, its range-topping trim could also get an air purifier, wireless Android Auto and Apple CarPlay, and ventilated seats (standard for 1st row, optional for 2nd row in the 6-seater variants) that are currently exclusive to the Safari Gold Edition.

Powering the Safari Dark Editon will be the same 2.0-liter, 4-cylinder, Kryotec turbocharged diesel engine as the regular variants that produce 170PS and 350Nm. It can be had with either a 6-speed manual or a Hyundai-sourced 6-speed torque converter automatic transmission.

If reports are to be believed, the Tata Safari Dark Edition will be available with XT+, XTA+, XZ+, and XZA+ variants. They will be demanding a significant premium over their standard counterparts which retail between Rs 18.86 lakh to Rs 19.81 lakh (ex-showroom).