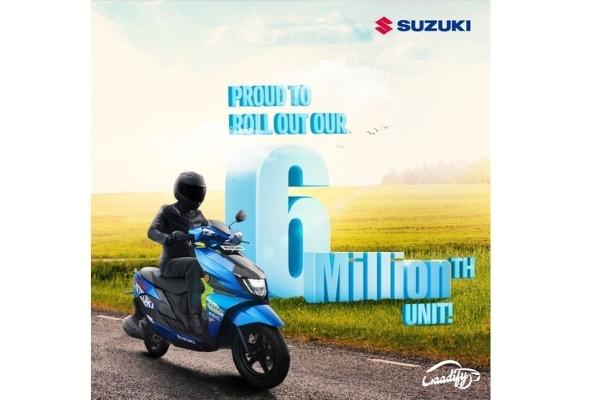 Suzuki Motorcycle India has achieved a milestone accomplishment with the deployment of 6 million two-wheelers in India. The six millionth vehicle to roll out from the manufacturer’s production facility in Gurugram is the recently launched Avenis 125cc scooter. The Company started its India operation in February 2006.

This year marks the completion of Suzuki Motorcycle India’s 15 years in the country. It is indeed heartening to also announce the roll out of our 6 millionth Suzuki two-wheeler product in India from our Gurugram plant. We are grateful to all our customers for their trust and loyalty that they have shown in the brand. I would also like to extend my heartfelt gratitude to all our dealer partners and suppliers who have continuously supported us by ensuring and delivering the quality products and services. All these efforts helped us to retain the customers’ long-term belief in the brand, Suzuki two-wheelers.

This 6 millionth milestone is a testament to our continued commitment to providing superior value to our customers in India. We are delighted that we could reach this landmark despite the challenges trollouthrown by the second wave and the global semiconductor shortage across the world.”

SMIPL is the house for some of India’s most loved products such as Access 125, Gixxer 250 and 150 series, Burgman Street, and the recently introduced Avenis 125 that reverberate comfort, excitement, luxury, and sportiness.