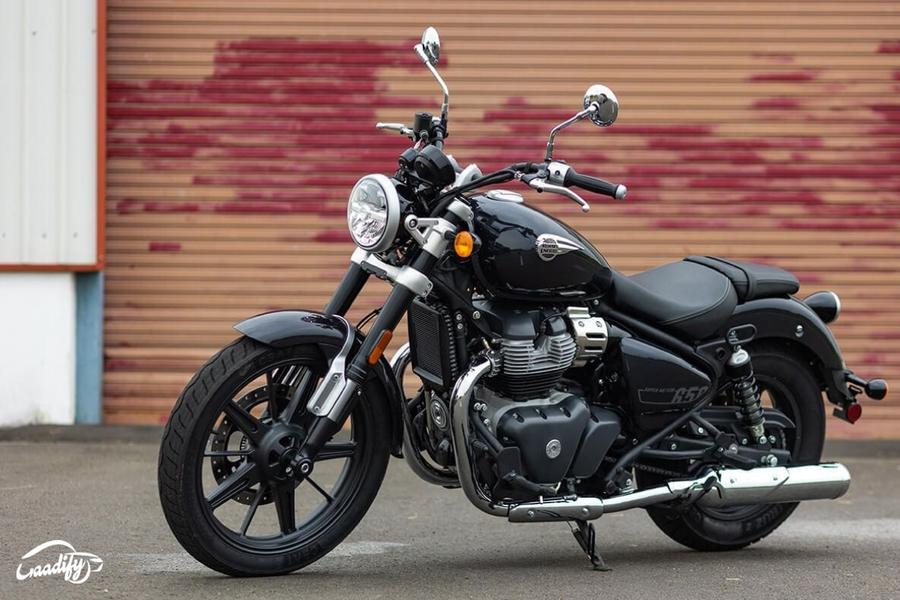 Debuted at EICMA 2022, the Royal Enfield Super Meteor 650 has finally been launched in India. The flagship cruiser comes in three variants, with prices ranging between Rs 3,48,900 to Rs 3,78,900 (ex-showroom, India). Bookings for the bike are now open, while its deliveries will commence from February 1, 2023.

As mentioned above, the Interstellar and Celestial are offered in two colours each, while the Astral is available in three colours. The range-topping Celestial variant comes loaded with a range of touring accessories, such as a tall windscreen, a deluxe touring seat and a pillion backrest.

Based on an all-new chassis, the Royal Enfield Super Meteor 650 is suspended on a 43mm inverted Showa fork (a first for a Royal Enfield bike) with 120mm travel and a pre-load adjustable rear twin-shock absorber setup with 101mm travel. It is equipped with tubeless Ceat Zoom Cruz tyres mounted on alloy wheels that measure 19/16 inches in diameter. For braking, the cruiser relies on a 320mm front and a 300mm rear disc setup, with a dual-channel Antilock Braking System as standard. With a seat height of 740mm, it is suitable for even short riders. However, at 241kg, it is the heaviest Royal Enfield bike. Moreover, it has a very low ground clearance of 135mm.

Being the flagship motorcycle from Royal Enfield, the bike also gets an LED lighting system, chrome-finished side mirrors, and a twin-pod instrument cluster with a turn-by-turn ‘Tripper’ navigation pod. It also gets a wide range of accessories, letting customers personalise it as per their taste and convenience.

Powering the Super Meteor is a 648cc, air-oil-cooled, parallel-twin engine that churns out 47PS at 7,250rpm and 52Nm at 5,650rpm. It comes mated to a 6-speed gearbox along with a slip-assist clutch. The same engine also powers the Interceptor and Continental GT. However, due to bespoke mapping and gearing, 80 per cent of its peak torque can be reached at just 2,500 rpm.

In the Indian market, the Super Meteor 650 can be seen as a more affordable alternative to the Kawasaki Vulcan S which currently retails for Rs 6.40 lakh (ex-showroom).