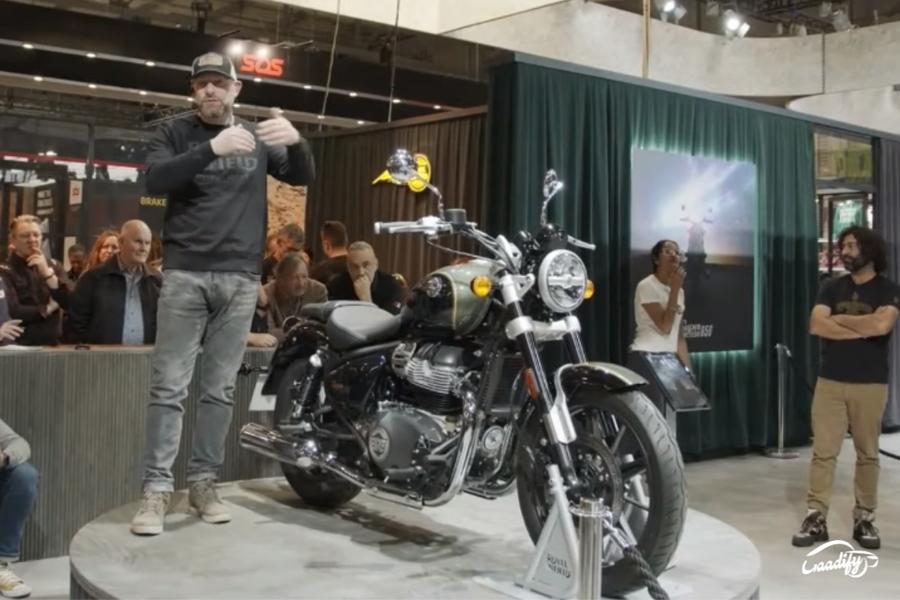 The highly-anticipated Royal Enfield Super Meteor 650 cruiser bike has finally been revealed at the ongoing EICMA 2022 motor show in Milan, Italy. It’s the first 650cc cruiser bike from the Chennai-based bikemaker that will be available from spring 2023 in Europe.

Based on an all-new chassis, the Super Meteor 650 uses a 43mm USD fork up front (a first for a Royal Enfield bike) with 120mm travel and a pre-load adjustable twin-shock absorber setup with 101mm travel at the rear. For braking, it gets a 320mm front and a 300mm rear disc setup, with dual-channel ABS as standard. It has a seat height of 740mm which makes it ideal even for riders with short heights. However, tipping the scale at 241kg, it is the heaviest of all Royal Enfield bikes. Also, it has a very low ground clearance of 135mm.

Royal Enfiled has offered the Super Meteor 650 in two trim levels:  Standard and Tourer. The Astral and the Interstellar colourways are for the standard variant, while the range-topping tourer variant will feature the Celestial colourways. Interstellar and Celestial are offered in two colours each, while the Astral is available in three colours.

It will come with a wide range of accessories, letting customers to personalise it as per their taste and convenience.

At the heart of the Royal Enfield Super Meteor is the same 648cc, air-oil-cooled, parallel-twin engine as the Interceptor and Continental GT that makes 47PS at 7,250rpm and 52Nm at 5,650rpm. It comes mated to a 6-speed gearbox along with a slip-assist clutch. According to the bikemaker, 80 percent of the Super Meteor 650’s peak torque can be reached at just 2,500 rpm due to bespoke mapping and gearing.

The Royal Enfield Super Meteor 650 will make its India debut at the upcoming Rider Mania 2022 which be held from 18- 20 November 2022 in Goa. Expect its prices to start from around Rs 3.5 lakh (ex-showroom).