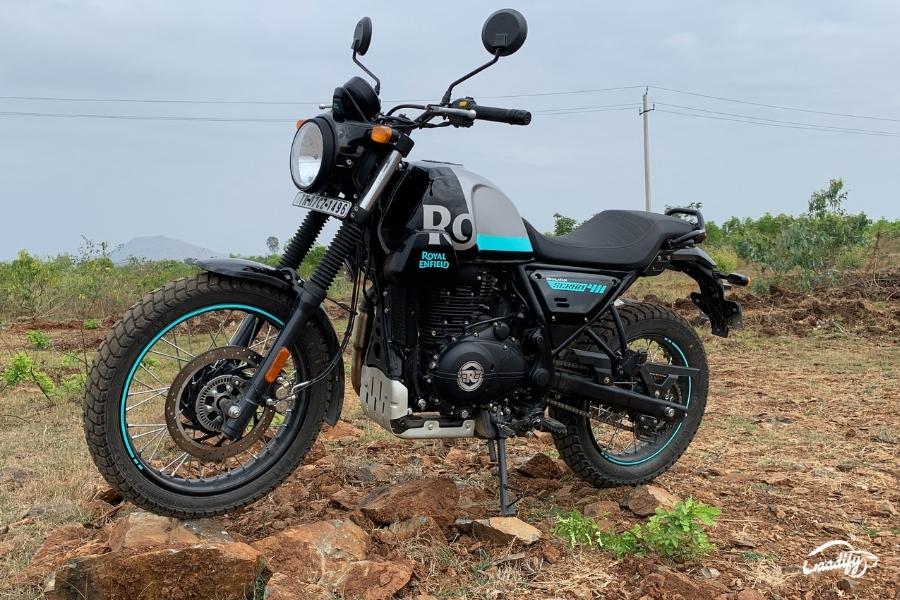 The Royal Enfield Scram 411 has been launched in India at a starting price of Rs 2.03 lakh (ex-showroom) that goes up to Rs 2.08 lakh, depending on the color option. It faces competition from the Honda CB350RS (Rs 2.01 lakh) and Yezdi Scrambler (Rs 2.05 lakh).

Introduced as a more accessible version of the Royal Enfield Himalayan, several design elements distinguish the Scram 411 from the Himalayan. The most significant change includes the front 19-inch wheel (wrapped in a 100-section dual-purpose tire) instead of a 21-inch unit seen on the Himalayan. The brand also does away with the headlight brace for a fork clamp-mounted headlamp unit (sans the windshield). Even the multi-dial instrument console from the Himalayan has been offset by a semi-digital unit with an optional Tripper Navigation pod (same as Meteor 350).

The sturdy fuel tank framing has also been replaced by two small side panels. It also gets a single-piece seat, which at 795mm, is 5mm lower than the Himalayan’s. Furthermore, the handlebar is different and 60mm lower & 20mm closer to the rider. The grab rails and the tail section have also been tweaked to suit the character of the bike. Besides, the central stand will be an optional unit with Scram.

At 15-litres, the fuel tank capacity of the bike remains unchanged. However, at 200mm, the ground clearance is down by 20mm.

All the changes have made the Scram approximately 5kg lighter than the RE Adventure.

Royal Enfield has also made some modifications to the suspension setup. Yes, the Scram 411 continues to use the same 41mm telescopic fork from the Himalayan, but the suspension travel has been reduced by 10mm to 190mm. As for braking, the 300mm front and 240mm rear disc setup (assisted by dual-channel ABS) have been retained from its ADV sibling. However, you cannot switch off the rear ABS in Scram 411.