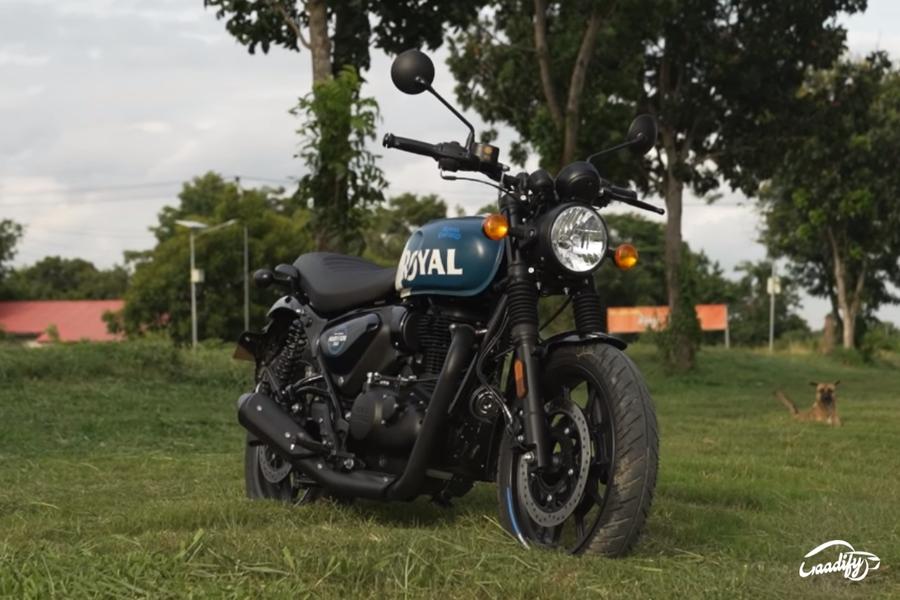 Hunting is not a game of blood, it is a sport that should be in your blood. And in the case of Royal Enfield, this statement turns out to be 100 percent correct. The bikemaker has been bashing out fantastic motorcycles of late and now it has undertaken the entry-level roadster segment with the all-new Hunter 350, making it the most affordable Royal Enfiled bike based on the J-series platform. So, does the Hunter 350 have what it takes to shoot RE into a new spirited direction? We find out whether it really does.

The Royal Enfield Hunter 350 is undoubtedly a Royal Enfield bike with the brand’s iconic retro bits like a round halogen headlamp, taillight, rearview mirror, and side indicators. Its teardrop fuel tank has knee recesses that make it look old-school and sporty at the same time.

Speaking of the features, the Hunter gets the same offset circular semi-digital instrument cluster as the Classic 350 and Meteor 350 that comprises a large analog speedometer and a tiny digital display with two trip meters, a clock, gear position indicator and a fuel gauge. The switchgear is also the same as its elder sibling, and so the quality of those is a bit disappointing.

Royal Enfield also offers a wide range of Genuine Motorcycle Accessories (GMA) with the Hunter 350, including a tripper navigation pod and backrest which added a lot of pizazz and practicality.

Royal Enfield offers the bike in three variants, namely Retro, Metro, and Metro Rebel. Compared to the Metro trims which get alloy wheels, split grab rail, a ribbed patterned seat, dual-channel ABS, and round side indicators, the base-spec Retro trim comes with wire-spoked rims with tubed tires, tubular pillion grab rail, a distinct seat, drum brake at the rear and single-channel ABS. The Retro trim also gets a more straightforward analog rider’s console with a small LCD unit and a different set of switchgear compared to the one seen on the Metro trims. Further differentiating them is the wide range of color options. Click here for more details.

Royal Enfield’s familiar 349cc counterbalanced air-cooled motor reprises its role here on the Hunter 350 as well, churning out the same 20.2PS and 27Nm. Push the ignition dial and you’re welcomed by a sophisticated throbbing. Royal Enfield claims the ignition timing has been altered to make it slightly snappier than the Classic 350. Also, you don’t have to work hard on the gearbox to hold it in the sweet spot. It feels smoother, and its city mannerisms top it off. Having said that, the wide-spread torque will happily chug along at 30kmph while in 4th gear, but if you need to overtake quickly, a downshift will be mandated. I was also impressed with the lack of vibration even when I pushed the bike past 90kmph. However, the engine heating was a big concern and Royal Enfield should definitely work on it.

Eescaping city traffic are daydreams in the metropolis. However, it seem more appealing from the saddle of a Royal Enfield Hunter 350. Yes, you read it right. At 181kg, the Hunter is the lightest RE bike, making it almost 14 kilograms more lightweight than the Classic 350. It gets a mid-set footpeg and a mid-rise handlebar for an upright riding stance. Furthermore, its wheelbase is 20mm shorter than the Classic and the rack angle is one degree sharper, making it more effortless for city riding as well as sly trail sections. But as a result, the suspensions have become a bit hardened and you can feel even a small blemish. However, its 120-section front and 140-section rear tires make the ride a bit more optimistic.

The seat height, on the other hand, has gone down by only 5mm when compared to its elder sibling, making it pretty accessible even for short riders. Also, its unique single-piece seat with thicker foam has a ribbed pattern on the rider’s side, so your bottom stays comfy on long rides. Plus, there’s sufficient room for larger riders to move around in the seat. The pillion seat, however, is relatively narrow with any ribbed pattern, so you won’t want to be there for long.

For braking, the Hunter 350 gets a 300mm disc at the front and a 270mm one at the rear with dual-channel ABS. The anchoring bite simply adequate; but not enough to slow down the bike rapidly.

Cons (Things we don’t like/could have been better)

In light of its price range (Rs 1.50 lakh to Rs 1.69 lakh ex-showroom), the Royal Enfield Hunter 350 looks & feels like a friendly & modern motorcycle that will surely attract new riders.