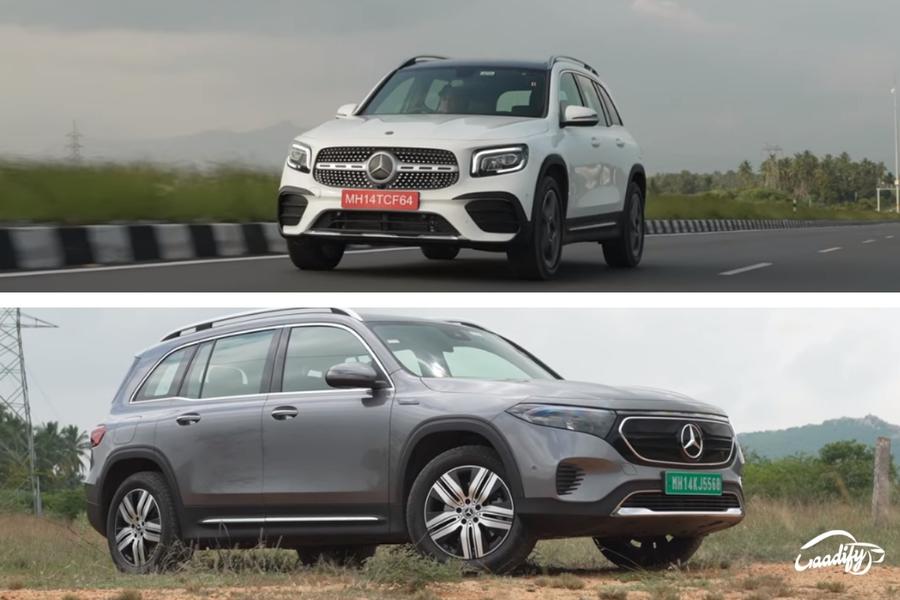 Mercedes Benz has launched the ICE-powered GLB and its electric iteration, the EBQ, in India via the CBU (completely built-up units) route at a starting price of Rs 63.80 lakh and 74.50 lakh (all prices ex-showroom), respectively. The GLB is offered in three variants: 200, 220d, and 220d 4Matic AMG, whereas the EQB comes in a sole 300 4Matic trim. Here’s a look at their prices: –

Borrowing its design cues from the Mercedes Benz GLS, the crossover-styled GLB has a butchy and brawny appearance. The EQB also looks similar to the GLS, albeit with a few EV-specific cosmetic tweaks such as a closed-off grille, differently designed alloy wheels, a slightly tweaked lighting system, and reprofiled bumpers.

The AMG variant of the Mercedes Benz GLB also gets sports seats, an AMG-spec steering wheel, and a carbon fibre-like finish on the dashboard and door panels.

As mentioned above, the Mercedes Benz GLB comes with both petrol and diesel engine options. The petrol is a 1.3-litre, 4-cylinder turbocharged unit with cylinder deactivation tech that also powers the A-Class sedan. Mated to a 7-speed automatic transmission and front-wheel-drivetrain, this engine makes 165PS of maximum power and 250Nm of peak torque.

The diesel mill, on the other hand, is a 2-litre unit that makes 190PS and 400Nm. It gets an 8-speed automatic transmission and is offered with a front-wheel drivetrain as standard. Its 4Matic AMG trim, however, gets an all-wheel-drive (AWD) system.

Speaking of the Mercedes Benz EQB, it gets an all-wheel drive setup via dual electric motors (one on each axle), delivering a maximum power output of 228PS and a peak torque of 390Nm. This lets the electrified crossover complete the century sprint in just 8 seconds before reaching the top speed of 160kmph. As for range, it uses a 66.5kWh battery pack that offers a WLTP claimed range of up to 423km and takes around 32 minutes to get charged from 10 percent to 80 percent via a 100kW DC fast charger. A 11kW AC charger takes around 6 hrs & 25 mins to energise it from 10-100 per cent.

Both of these newly launched Mercedes CUVs don’t have any direct rivals in the Indian market. However, the EQB can be seen as a 7-seater alternative to the BMW iX and Volvo XC40 Recharge.