Hyundai Motors India has finally introduced the clutchless manual gearbox called ''Intelligent Manual Transmission (iMT)" to the Venue sub-compact SUV at a starting price of Rs 9.99 lakh (ex-showroom India). The iMT is only limited to the 1.0-litre turbo-petrol engine.  The Korean maker has also launched a new S+ variant along with sport trims/cosmetic packages for selected diesel and turbo-petrol variants. Here, have a look at the updated variant line-up of the Venue:- 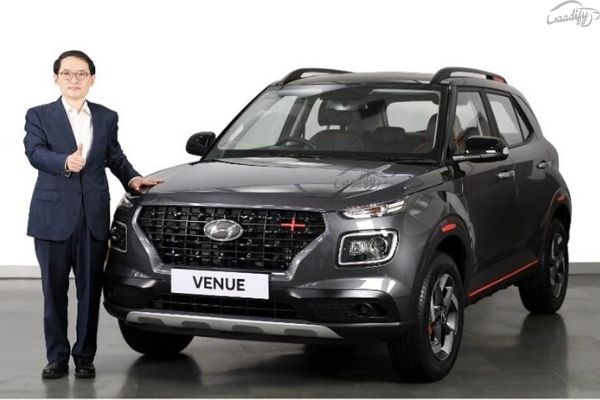 How Does iMT Work?

The iMT stands for 'Intelligent Manual Transmission'. It gives the advantage of shifting gears like a manual transmission but without using a clutch. The iMT comes with a two-pedal setup with a gear shifting lever. However, there will be no clutch pedal given in the footwell. 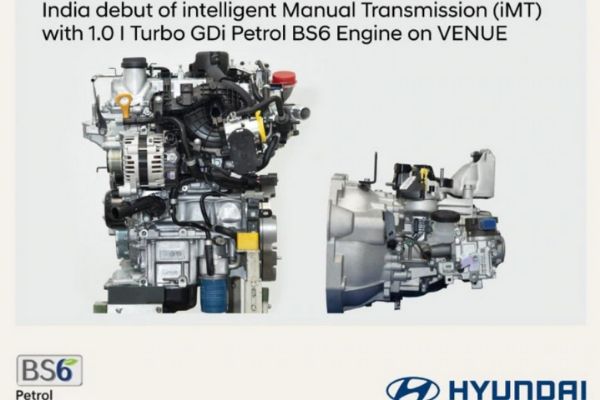 The iMT system includes an intention sensor, hydraulic actuator, and a transmission control unit (TCU). When the driver intends to shift the gears, the intension sensor transmits a signal to TCU. Then, the TCU sends a signal to the hydraulic actuator which forms a hydraulic pressure. This hydraulic pressure is applied by the concentric slave cylinder to engage/disengage the clutch plates. Hence, the complete process of engagement and disengagement of the clutch will be done by the electromechanical method.

Hyundai Venue's sibling, the upcoming Kia Sonet will also get the iMT option.

As mentioned earlier, the Sport pack is available from the SX variant onwards with the choice of a turbo-petrol or a diesel engine. The sports trim mainly consists of some cosmetics upgrades which include two new dual-tone paint with black roof, intake surrounds at the front bumper, 'Sport" badging, front glossy black grille, and grey roof rails. Hyundai has also given some sporty red color accents in the front grille, brake calipers, wheel arches, and side molding. 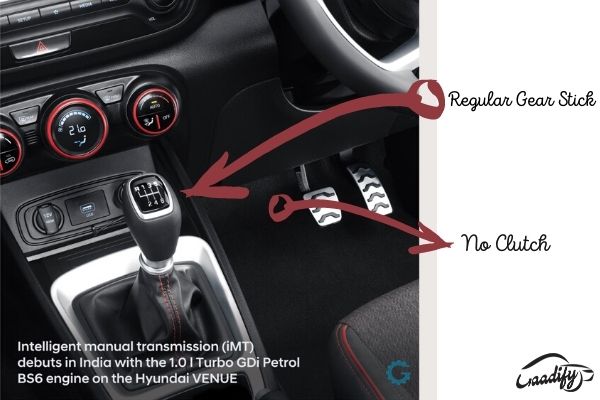 Red highlights are given inside too, on the AC vents and on its controls panel as well as on the stitching of gear knobs cover, steering wheel, and the upholstery. Additionally, it also gets the metal finished pedals and grey upholstery.

Hyundai has also launched a new S+ variant. It has positioned between the S and SX variants. The S+ variant is only available with the 1.2-litre petrol engine (83PS/114Nm) mated to a 5-speed manual gearbox. It demands a premium of Rs 92,000 over the S variant. For this added amount it offers an 8-inch infotainment system with Android Auto and Apple CarPlay, projector headlights, projector fog lamps and LED taillights.

Prior to Hyundai, it was expected from Kia Motors to introduce the iMT in India with its upcoming Kia Sonet sub-compact SUV. But surprisingly Hyundai has acquired the segment-first title for the iMT. The clutchless manual gearbox can be considered as the cheaper alternative to the automatic gearbox with manual shifting advantage. Hopefully, it will get a good response from customers.