Ford EcoSport SE Likely To Launch In Next Week

American carmaker Ford is gearing up to launch the EcoSport SE, a new variant of the subcompact SUV without a tailgate-mounted spare wheel. Recently, it has been spied during a TVC shoot alongside the existing model. Now, according to the latest reports, this new EcoSport variant is likely to launch in the upcoming week. The new SE variant looks similar to the model sold overseas. It features a silver skid plate on the bumper and a revised positioning of the licence plate, which now has been shifted to the centre part of the tailgate, just below a thick chrome garnishing which is also a new addition to the SUV. Besides this, it is unlikely to feature any spare wheel. As an alternative, the brand could offer a puncture repair kit along with the tyre pressure monitoring system.

Under the hood, the EcoSport SE is likely to carry the same engine options as the current model, comprising 1.5-litre petrol (122PS/149Nm) and 1.5-litre diesel (100PS/215Nm) units. While a 5-speed manual transmission will be standard for both mills, the petrol motor could also get a 6-speed torque converter automatic gearbox as an option. Ford could also offer the updated EcoSport with Mahindra’s 130PS, 1.2-litre mStallion T-GDI engine which will also make its way to the XUV300 sub-compact SUV. 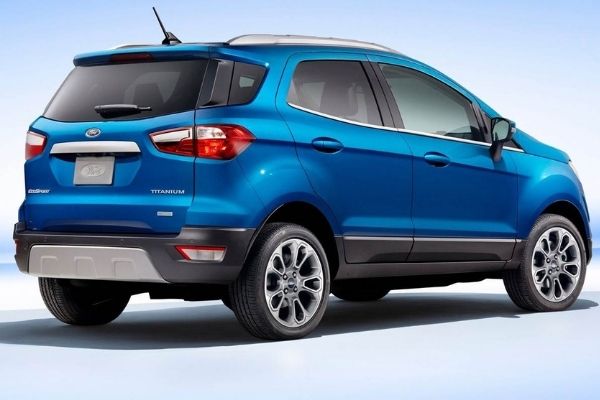 Ford could position the SE trim between the Sport & Titanium variants. Currently, the Ford EcoSport is priced from Rs 7.99 lakh to Rs 11.49 lakh (ex-showroom), and this price range is expected to remain unchanged. In the sub-4m SUV segment, the EcoSport will continue to rival the Hyundai Venue, Maruti Vitara Brezza, Tata Nexon, Kia Sonet, Mahindra XUV300, Toyota Urban Cruiser, and the recently launched Nissan Magnite, and Renault Kiger.