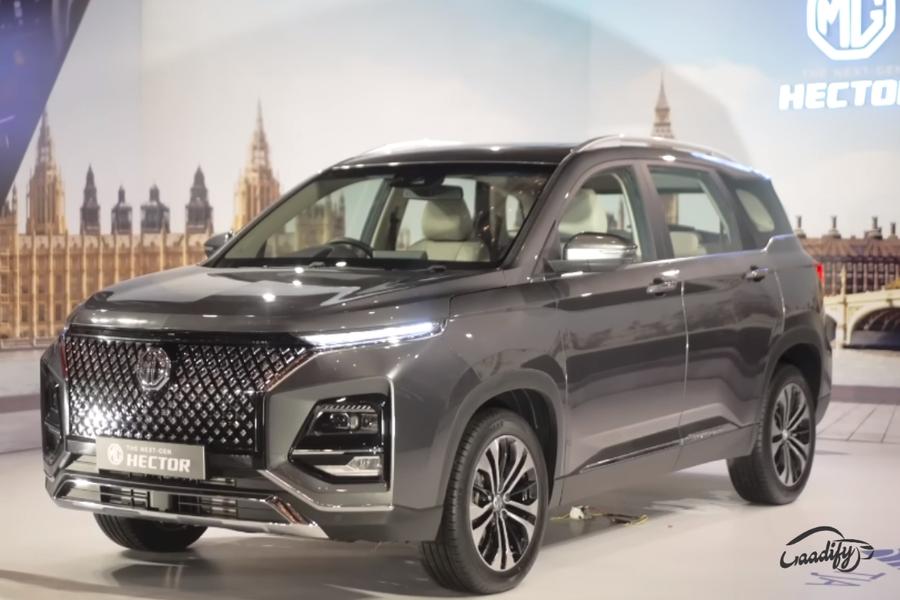 2023 MG Hector Revealed Ahead Of Launch At Auto Expo

In a bid to remain competitive in the hotly contested mid-size SUV segment, MG Motor India has introduced yet another significant mid-life update for the Hector. Compared to its predecessor, it has received tons of cosmetic enhancements and plenty of new features. Here’re the details: –

The most prominent change to the 2023 MG Hector is upfront in the form of a massive grille with chrome-finished diamond-like elements that give it a bolder appearance. MG calls it an “Argyle-inspired Diamond mesh grille.” The split headlamp setup of the SUV remains the same, while the front bumper has been tweaked slightly to accommodate the new grille and chrome-finished skid plate. The side profile of the SUV also remains unchanged.

At the rear, you’ll notice that the tailgate has been redesigned and now features softer lines. Also, the gloss black tailgate applique has been replaced by the new LED-connected strip. There’s also the new HECTOR badging at the centre of the tailgate and tweaked rear bumper with angular creases.

As for its interior, the Hector is now fitted with a completely redesigned dashboard featuring silver highlights and stripes of ambient lighting. There’s also a larger 14-inch touchscreen infotainment system that provides even more features for connectivity. The infotainment unit is now compatible with wireless Android Auto & Apple CarPlay smartphone integration support. It also gets MAPPLS and MapMyIndia-based navigation, a Bluetooth-enabled digital key, voice-operated ambient lighting and a 7-inch configurable digital driver’s display.

No changes have been made beneath the bonnet. The facelifted Hector continues with the existing 143PS 1.5-litre turbo-petrol and 170PS 2-litre turbo-diesel engine. The former also comes with an optional 48V mild-hybrid system. While a 6-speed manual transmission is standard, the petrol engine can also be had with a CVT automatic transmission.

MG will announce the prices of facelifted Hector and Hector Plus on January 11 at the Auto Expo 2023.