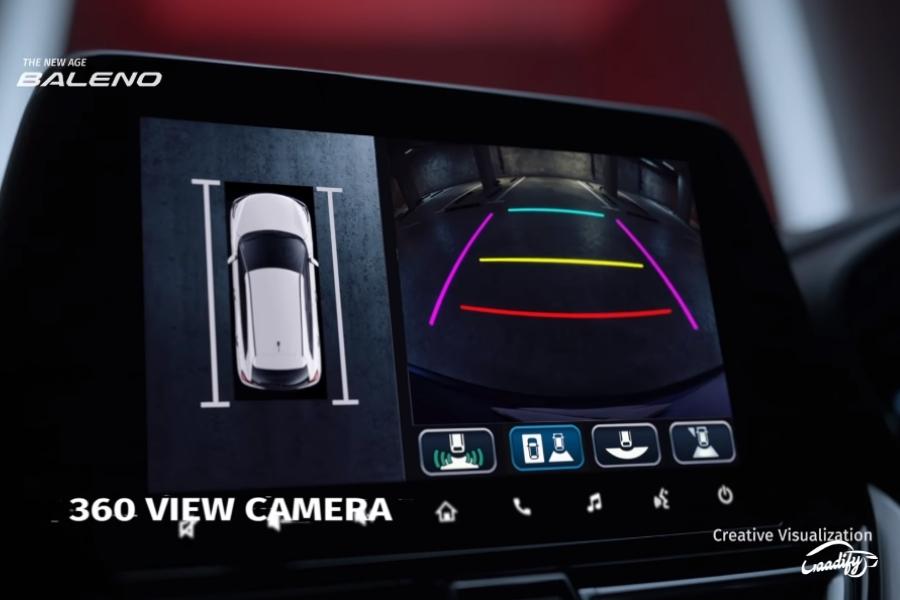 Maruti Suzuki revealed quite a bit in the build to launch of the 2022 Baleno facelift. The carmaker has now confirmed that the updated model will get the 360-degree camera, equipped with a larger 9-inch SmartPlay Pro+ floating touchscreen infotainment system.

Earlier, we also got a glimpse of its updated exterior profile and segment’s first heads-up display (HUD). It will get a new lighting system with new arrow-shaped Nexa signature LED treatment, a new slimmer grille, a slightly tweaked bonnet, and redesigned bumpers at both ends.

Inside, it will get a redesigned, layered dashboard with a free-standing infotainment system, Arkamys-tuned sound system with multiple modes, Swift’s flat-bottom steering wheel, and probably a slightly updated colour MID. It could also get connected car tech and AI-based voice assistant.

Powering the 2022 Maruti Baleno will be the 90PS 1.2-litre DualJet DualVVT petrol engine with a mild-hybrid system. Transmission options will include a 5-speed manual and an AMT unit. The same powertrain also propels the Maruti Suzuki Swift facelift.

Bookings for the new Baleno are already underway ahead of its price announcement later this month. It will demand a premium over its current price range of Rs 6.13 lakh to Rs 9.65 lakh (ex-showroom Delhi). Once launched, the premium hatch will rekindle its rivalry against the Hyundai i20, Volkswagen Polo, Tata Altroz, and Honda Jazz.