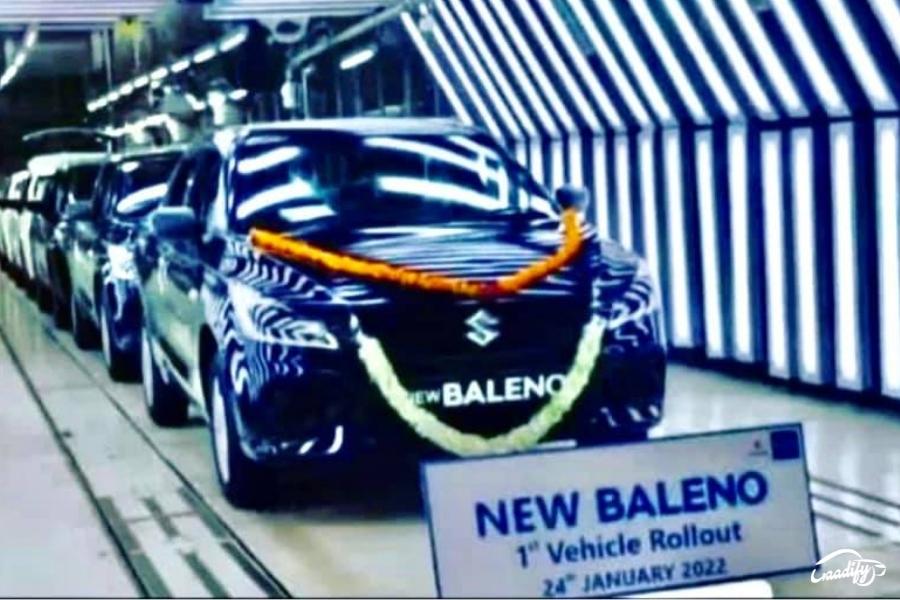 We all know that Maruti Suzuki is working on the Baleno facelift, and it has been spotted several times during testing. And now, a picture of the premium hatchback has surfaced online, revealing that its production began on January 24, 2022.

While the latest spy image isn’t clear, we already know that the new Baleno will get a host of visual changes as well as new features.

Starting from the exterior, it will get a revised V-shape mesh-pattern front grille that has gotten wider and bolder than the ongoing model. There will also be the new LED headlamps, slightly altered bonnet, redesigned bumpers, and renewed tailgate with a split LED taillamp setup, making its road presence more apparent.

The most significant update will be inside the cabin with a new dashboard layout as well as a bigger floating touchscreen infotainment system (probably of 8-inches). It is likely to get plenty of new features such as wireless Apple Carplay and Android Auto, connected car tech, a wireless charging pad, a heads-up display (HUD), Electronic Stability Program (ESP), and six airbags.

The 2022 Maruti Baleno Facelift should retain the ongoing engine options that include 83PS 1.2-litre K12B petrol and 90PS 1.2-litre Dualjet Dual-VVT petrol with a mild-hybrid system. A 5-speed manual transmission will be offered as standard, while the CVT automatic unit could be replaced with an AMT option.

Considering all the changes, the new Baleno will bear a significant premium over the current model that retails from Rs 6.14 lakh to Rs 9.66 lakh (ex-showroom, India). Once launched, it will emerge as a more prominent offering against the Hyundai i20, Honda Jazz, Tata Altroz, and Volkswagen Polo.