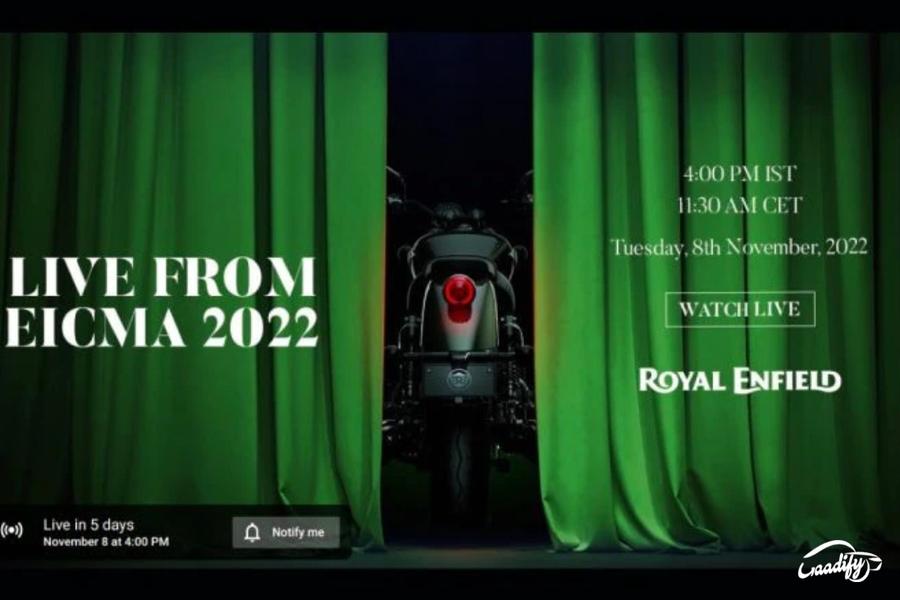 Royal Enfield has officially announced to unveil the Super Meteor 650 on November 8 at EICMA 2022 (Milan Motorcycle Shows), with an expected India launch at the Rider Mania 2022, which is set to be held between 18-20 November.

Royal Enfield Super Meteor 650 – What Does The Teaser Reveal?

Confirmed by the official teaser, the new RE Super Meteor 650 will be equipped with a wide & curved rear fender, with circular-shaped LED taillight. A split bench seat and dual shock absorbers will also be included, along with a semi-digital console, similar to the Meteor 350 with an integrated Tripper navigation system. It could also get the latest delicacies like an all-LED lighting system and riding modes.

Since the bike has Pirelli Phantom Sportscomp tyres, it seems to be European-spec model. However, its Indian-spec version is likely to feature Ceat Zoom Cruze tyres seen on the RE 650 Twins (Interceptor 650 and the Continental GT 650).

At the heart of the RE Super Meteor 650cc cruiser is likely to be the same 47PS/52Nm 649cc parallel-twin engine as the Interceptor 650 and Continental GT 650 that comes with a 6-speed transmission accompanied by a slipper clutch.

We assume Royal Enfield to price the Super Meteor 650 from around Rs 3.20 lakh (ex-showroom), placing it as a more affordable alternative to the Kawasaki Vulcan S.