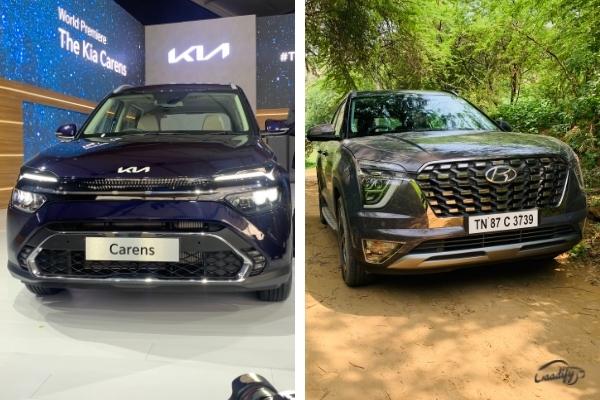 Kia India has recently revealed the Carens three-row SUV that will be launched in the first quarter of 2022. While it is based on the same platform as the Hyundai Alcazar, both utility vehicles have several differences, which we have compiled here:

While Hyundai Alcazar largely resembles the Creta on which it’s based, the Kia Carens look completely different from its 5-seater counterpart, the Seltos. In fact, it has debuted Kia’s new ‘Opposite United’ design language in India. The Carnes has a more MPV-like stance and lacks the aggressiveness of an SUV. Kia has called the Carens a ‘Recreational Vehicle’.

Another big difference is in their size. Though Kia hasn’t revealed Carens’ dimensions officially, the leaks suggest that it will be 4,540mm long with a segment’s largest wheelbase of 2,780mm. That means the Carens will be 40mm longer than the Hyundai Alcazar. While the difference isn’t too large, Kia claims that its last-row seat has been specially optimized for better comfort, whereas the third-row of Alcazar is suited for kids only. It is also noted that the 16-inch alloy wheels of Carens are smaller than the 18-inches units on the Alcazar.

Inside, the Kia Carens sports a wraparound dashboard with a neatly integrated 10.25-inch touchscreen infotainment system. There is also some fine detailing on the dashboard that extends to the doors. On the other hand, the Alcazar gets Creta’s like dashboard layout, encased in a distinct dual-tone black-&-brown ivory.

In terms of features, the Kia Carens is the first car in its segment that offers 6-airbags across all variants, whereas the Alcazar provides only dual-front airbags in the base variant and six airbags from the mid-spec Platinum trim. The Alcazar additionally gets a 360-degree camera and blind-view monitoring system.

For creature comforts, the Carens gets the segment’s first electric one-touch tumble fold function for the second-row seats for easy ingress and egress in the third row. The Alcazar, on the other hand, gets a manual lever for tumble function. However, the Hyundai provides a panoramic sunroof and wireless charging for second-row passengers as well. On the other side, the Carens goes with a traditional single-pane sunroof and gets wireless charging for front passengers only.

Another difference is that the Carens offers roof-mounted AC vents for rear passengers, while the Alcazar gets centrally placed second-row AC vents and side-placed vents for the third row.

The Carens will be available with three engine options as the Kia Seltos: 1.5-litre petrol (115PS/144Nm), 1.5-litre diesel (115PS/250Nm), and 1.4-litre turbo-petrol (140PS/242Nm). While all will get a 6-speed manual transmission as standard, the automatic transmission option will be restricted to the diesel (6-speed torque converter) and turbocharged gasoline (7-speed dual-clutch) mills.

On the other hand, the Hyundai Alcazar comes with the 115PS 1.5-litre diesel and 159PS 2.0-litre naturally aspirated petrol engines, paired with either a 6-speed manual or torque converter automatic transmission.