After launching new color options for Pulsar 180 last month, Bajaj is now all set to introduce new ivories for the Dominar 250 tourer motorcycle. Recently, the bike has been spotted at a dealership in Columbia with Aurora Green and Vine Black colors, which it had borrowed straight from its elder sibling, Dominar 400. While there is no official confirmation, the Indian-spec Dominar 250 could also get these new shades. With this, the younger Dominar will be available in a total of four shades, including the current Canyon Red and Charcoal Black. 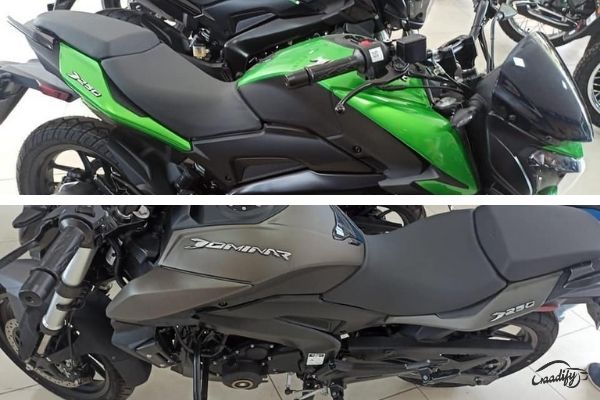 For the people not in know, both Bajaj Dominar 250 and 400 share the same design and features. The only visual differences between the two bikes are the badging on the tail section, colors, and diamond-cut alloy wheels that are exclusive for the Dominar 400. Hence, launching these two colors with the smaller Domi would decrease the cosmetic differences between the two to a huge extent. However, the mechanical difference would continue to be there. It utilises a 248.7cc DOHC single-cylinder liquid-cooled motor that churns out 27PS and 23.5Nm, whereas the Dominar 400 employs a 373.3cc DOHC liquid-cooled single-cylinder engine that generates 40PS and 35Nm. Both motorcycles come mated to a 6-speed transmission, aided by a slipper clutch.

As for underpinnings, both bikes are based on a perimeter frame. However, the quarter-liter Dominar uses a 37mm USD fork compared to the 43mm unit on its elder sibling. The rear monoshock is the same as the Dominar 400. On the other hand, braking duties are taken care of by the smaller 300mm (-20mm) disc at the front and the same 230mm disc at the rear. While both naked tourers ride on 17-inch alloy wheels wrapped in radial tires, the tire width of Dominar 250 is marginally slimmer (100/80- front, 130/70-rear) than the bigger Dominar (100/70-front, 150/60-rear).

Bajaj has recently increased the prices of both the Dominar 250 and Dominar 400 in India. The Bajaj Dominar 250 is now priced at Rs 1.70 lakh, while the larger Dominar costs Rs 2.02 lakh (both prices ex-showroom). At this price point, the Bajaj Dominar 250 competes against the Suzuki Gixxer 250, TVS Apache RTR 200 4V, and Yamaha FZ range.