Kia India has recently announced to launch the updated Sonet & Seltos SUVs in May 2021. The brand has also revealed its plan to assault into an all-new segment in early 2022. While the carmaker is yet to reveal any details about the product, speculations are being made that it could be a Seltos-based 7-seater SUV. In fact, a three-row Kia SUV was recently spied testing on Indian terrains and it shares some of its design cues with the Seltos. 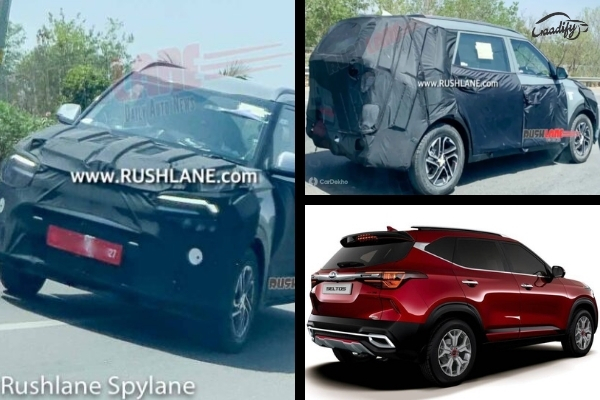 By paying attention to the above image, one can clearly notice that it has a similarly racked A-pillar and front doors to the Seltos SUV. While the DRLs of the car somewhat resembles Sonet's vampire's teeth-inspired unit, the main headlamp unit looks comparable to that of Seltos. It also suggests that it could get a redesigned front facia. And like the Creta-based Alcazar, the rear profile could also be updated for a distinguished visual appearance. It could also borrow the Alcazar's underpinnings, featuring a 2,760mm long wheelbase and tweaked suspension setup. It is likely to come in both 6- and 7-seater configurations.

While there is no official confirmation, it could also share its powertrains with the upcoming Hyundai Alcazar. That said, the upcoming Kia car could be offered with a 2.0-liter petrol (152bhp/192Nm) and a 1.5-liter turbo diesel (115bhp/250Nm) engine options. Kia is expected to offer the SUV with both manual and automatic transmissions. As mentioned above, this Kia SUV will debut in early 2022. Once launched, it will be positioned against the likes of MG Hector Plus, Tata Safari, and the upcoming Mahindra XUV700 and Hyundai Alcazar. More details on the upcoming new Kia model are likely to be revealed in near future. So, stay tuned with Gaadify.com for more updates! Also, subscribe to our YouTube channel.