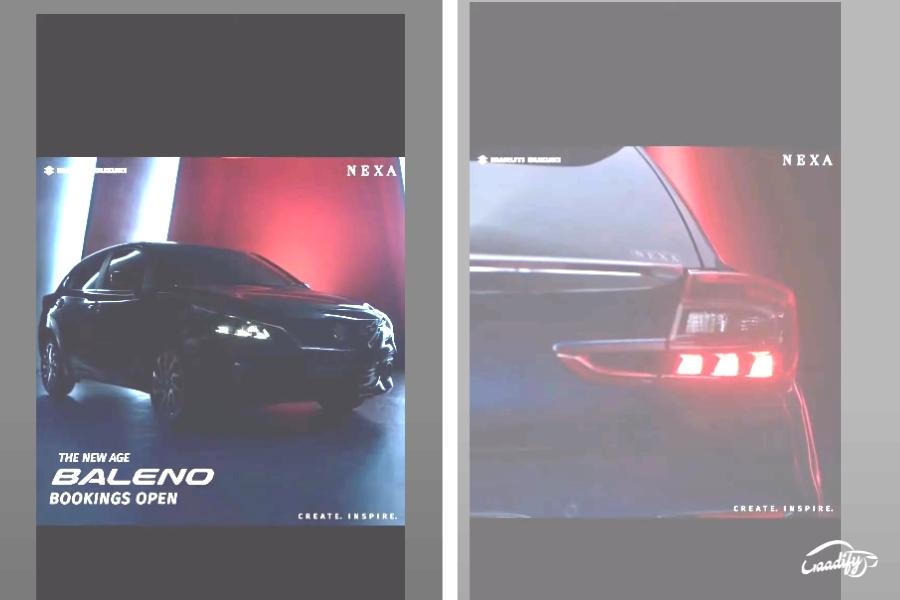 Maruti Suzuki has once again teased the upcoming Baleno facelift that is expected to be launched by the end of this month. Bookings for the upgraded hatch are already underway at Rs 11,000.

As the above teaser reveals, the 2022 Maruti Suzuki Baleno Facelift will come with new headlamps with a triangular LED treatment. However, it will continue to get the bulb-type side indicators. Maruti has also tweaked the front grille and bumper of the hatchback, giving it a lot bolder appearance than that of the existing model.

At the back, it gets elongated tail lamps with a slightly reworked tailgate. However, it is likely to sport the same alloy wheel design as seen on the pre-facelift model.

Inside, the new Baleno will get a segment’s first heads-up display (HUD) that will be placed above the instrument console so that you don’t have to take your eyes off the road to read essential information like time, car’s speed, engine rpm, fuel economy, etc. While the brand is yet to be revealed, we believe the HUD will be limited to the automatic variants of the new Baleno.

Maruti will also equip the car with a newly designed dashboard, along with a new floating infotainment screen with Android Auto and Apple CarPlay. It could also be offered with 6-airbags and Electronic Stability Program (ESP).

Under the bonnet, the facelifted Maruti Baleno will get the same 1.2-litre VVT naturally-aspirated and 1.2-liter Dualjet petrol engines as the ongoing model. While the former is good for 83PS/113Nm, the Dualjet engine makes out 90PS/113Nm of torque. The dualjet unit also features a 12-volt mild-hybrid system for optimum fuel efficiency. Transmission duties on the new Baleno are likely to be performed by a 5-speed manual gearbox and an optional AMT instead of the existing CVT unit.